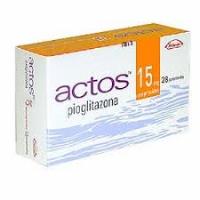 Santa Clara, CA: Findings from an updated review by the US Food and Drug Administration (FDA) on the use of type 2 diabetes medicine pioglitazone (Actos, Actoplus Met, Actoplus Met XR, Duetact, Oseni) suggests there may be an increased risk for bladder cancer associated with drug.
Read [ Updated FDA Review Suggests Link Between Actos and Bladder Cancer ]

Patients Allege They Were Harmed by Actos

Shreveport, LA: It may have been a few years since Actos litigation first got underway, but lawsuits are still being transferred into the Actos multidistrict litigation, and plaintiffs are still filing lawsuits alleging they were harmed by the use of the drug. Meanwhile, allegations from a whistleblower that Takeda Pharmaceuticals paid kickbacks for prescribing Actos have not helped the drugmaker's case.
Read [ Patients Allege They Were Harmed by Actos ]

Actos Bladder Cancer Lawsuits Continue in the US and Canada

Health Canada Knows All About Potential for Actos and Bladder Cancer

Ottawa, ON: The caseload in the Actos bladder cancer multi-district litigation continues to swell as Actos side effects lawsuits such as that filed by plaintiffs Matthew Gasparovic and Sumico Yamana are brought into the fold. In the meantime, we’re just beyond the 5-year anniversary of an investigation into Actos and bladder cancer by the Canadian equivalent of the US Food and Drug Administration (FDA), Health Canada.
Read [ Health Canada Knows All About Potential for Actos and Bladder Cancer ]

Washington, DC: The risk for Actos bladder cancer as translated through the Takeda Pharmaceuticals Q3 forecast reads like a matter-of-fact risk assessment as a cost of doing business, rather than a reflection of any real concern over the potential for Actos and bladder cancer in association with the type 2 diabetes drug.
Read [ Takeda Promotes “Fairness and Honesty” While Lawsuits Climb ]

Cleveland, OH: Years after lawsuits concerning the risk of Actos side effects were first filed, new plaintiffs alleging a link between Actos and bladder cancer are still coming forward. The plaintiffs claim they were harmed by the use of Actos and were not adequately warned about the potential risk of serious side effects.
Read [ More Actos Lawsuits Filed ]

New Orleans, LA: More plaintiffs are coming forward to file Actos lawsuits alleging they were harmed by Actos side effects. Actos has reportedly been linked to an increased risk of serious side effects. Plaintiffs allege they developed bladder cancer as a result of using Actos to treat their diabetes. Those claims are now seemingly bolstered by a new study in BMJ.
Read [ Study Links Actos to Bladder Cancer ]

Toronto, ON: The headlines in Canada screaming the potential for Actos bladder cancer were loud and compelling, with the Canadian Broadcasting Corporation (CBC) carrying a report from the Associated Press (AP) that the manufacturer of the best-selling diabetes drug on the planet was facing hundreds of lawsuits over the association of Actos and bladder cancer. Plaintiff Nancy Rios was concerned she would lose her bladder.
Read [ Four Class-Action Actos Bladder Cancer Lawsuits Bubbling in Canada ]

Boston, MA: A whistleblower lawsuit filed against Takeda Pharmaceuticals alleges the maker of Actos ignored concerns about potential Actos side effects, including Actos and bladder cancer, and actively promoted the use of Actos for treatment of prediabetes. A type 2 diabetes drug, Actos (pioglitazone hydrochloride) was never approved by the US Food and Drug Administration (FDA) for treating prediabetes.
Read [ Actos Lawsuit Slams Takeda Pharmaceutical Executives ]

To the general public, $2.37 billion might seem like the sort of money one would jump at the opportunity to have, but for those people who filed an Actos lawsuit against Takeda Pharmaceuticals, it just might not be enough. The deadline to sign up to be part of an Actos side effects settlement has passed, but because not enough people have joined in, that deadline has reportedly been extended. Meanwhile, more Actos lawsuits have made their way to court, with plaintiffs alleging they were not adequately warned about the link between Actos and bladder cancer.
Read [ Actos Lawsuits: When $2.37 Billion Isn’t Enough ]
Page: 1  2  3     Next»