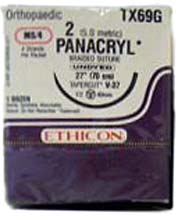 Panacryl sutures are a type of absorbable sutures, or stitches, that are commonly used to assist patient's wound healing after surgery. These type of sutures are intended to be absorbed by the body so there is no need for removal at a later time. Panacryl sutures unfortunately may have been the cause of more harm by not dissolving as intended.

The problems with Panacryl sutures usually arise after surgery with a variety of complications occurring. The most common problems experienced are:


Some History of Panacryl Sutures

The Panacryl suture was introduced in 1999. Panacryl sutures were marketed by the Johnson & Johnson division of Ethicon, Inc. as a unique product for the combination of absorbability and suture strength. It was also suggested that the Panacryl suture would be useful for extended wound support for up to six months. The Panacryl suture is made from a specific type of synthetic braided absorbable material and was used for orthopedic and general soft tissue surgery. These sutures were used in ligament and tendon repairs as well as for reattachment of ligaments and tendons to the bone.

The majority of Panacryl suture problems are related to their use in the soft tissue lower abdominal area. These problems often required additional surgery to remove the infected or problematic sutures. Patients who required these additional surgeries could have recovery times from as little as a few months to as long as a year. There are even cases where the Panacryl sutures remained unabsorbed in the patient for a year or more before infection, granulomas or other problems arose.

All Panacryl sutures were voluntarily recalled by Ethicon on March 28, 2006. The company's reason for the recall was that "The unique absorption profile of Panacryl in the suture could act as a foreign body so that surgeons should consider its use in specific situations." According to Ethicon, the recall includes 1,061,712 sutures which were distributed throughout the US and internationally.

Panacryl Sutures - One Woman's Death Sentence
"I work in the hospital where my mother-in-law had surgery so I know we used Panacryl sutures," says Stephanie Neiferd. "The surgeon couldn't believe how many sutures he pulled out of her, he was furious."

Panacryl Sutures: Still Suffering After Three Years
After shoulder surgery, Timothy Gamble spent three years in constant pain, from a wound that wouldn't heal. Imagine his surprise when a second surgery revealed that Panacryl sutures--supposedly absorbable--were still in his body, and the cause of a nasty infection.

Panacryl Endosurgical Sutures Defective, But Clock Ran Out for Plaintiff

In spite of the fact that a woman's infection following a cesarean section was believed to have been caused by Panacryl endosurgical sutures, two courts ruled for summary judgment in favor of defendant Johnson & Johnson Health Care Systems Inc. (J&J) and Ethicon Inc. because the plaintiff waited too long to launch her legal challenge against the allegedly faulty product.READ MORE
Panacryl Sutures—One Woman's Death Sentence

"I work in the hospital where my mother-in-law had surgery so I know we used Panacryl sutures," says Stephanie Neiferd. "The surgeon couldn't believe how many sutures he pulled out of her—he was furious."READ MORE
Panacryl Sutures: Still Suffering After Three Years

After shoulder surgery, Timothy Gamble spent three years in constant pain, from a wound that wouldn't heal. Imagine his surprise when a second surgery revealed that Panacryl sutures--supposedly absorbable--were still in his body, and the cause of a nasty infection.READ MORE

I had a squamis cell cancer removed from my face and the sutures came through the skin causing a staph infection and then an abscess that required an ER visit. They cut into my face again and I had a gauze pad inserted with a string hanging out of my face for a week. The scar from this is much more noticeable than that of the original surgery.

Posted by
Texas
on September 18, 2007
2-1 Vicryl sutures were used to close incisions after gall bladder removal. As soon as I woke from surgery I was is horrible pain under my skin and I knew something was wrong. This pain lasted for almost 3 weeks after the surgery. Approximately 3 weeks after surgery I had a large boil appear at the bottom of one of my incisions. I went to the doctor where he had to cut the boil off and clean a hole at least 4" deep that was full of infection. The doctor stated my body was having a negative reaction to the sutures. Less than a week later another incision became infected. I went to the doctor and he cut a suture that had not dissolved out and cleaned a hole full of infection about 1" deep. My doctor again stated my body was having a reaction to the sutures. A week later I noticed a piece of suture protruding out of the first wound. I toughed on it and pulled a 3" piece of undissolved suture out of the wound. A few days later I pulled another piece of undissolved suture out of a different spot. To this day I still have pain in my incisions. I can still feel sutures under my skin. My incisions are irritated and swollen ant times they become hard. I have had many surgeries, but have never had this happen. Because of these sutures a recovery that should have taken 2 weeks has now taken 6 weeks.
Posted by
Georgia
on June 19, 2007
I broke my right leg fibula ,tibia and talus bones and had 9 stainless screws and a plate installed into my lower right leg and was in the hospital for 6 days. I swelled up by 35 lbs and never recovered and for the next 5 years suffered horribly. I just got the metal taken out and started to feel better immediately. Are there any actions against the makers of surgical stainless steel? It turns out that the metal is made up of a dozen or so ingredients such as nickle ( 12 to 15 % ) silicon .75% and several other including iron 50+%. The research I have done online shows that stainless steel starts to disintegrate in the body over time.