After shoulder surgery, Timothy Gamble spent three years in constant pain, from a wound that wouldn't heal. Imagine his surprise when a second surgery revealed that Panacryl sutures--supposedly absorbable--were still in his body, and the cause of a nasty infection. 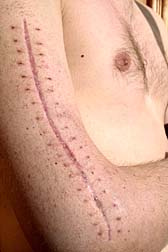 In 2004, Gamble was in a motorcycle accident and required surgery for a right humerus fracture. "I had continual problems," says Gamble. "After about six months, the wound healed, but not for long. I went through a year of therapy with constant pain and swelling in the area of my incision—and I had a limited range of motion.

"I moved to California and continued therapy but if I worked the muscle hard, I got inflammation in my shoulder. Finally I went to the VA hospital because it looked like tissue from inside my shoulder was pushing through the wound. The doctor used an aluminum nitrate swab to push it back in. The wound got smaller but continued to ooze out fluid—for at least another nine months.

I saw yet another doctor and he did blood tests and an x-ray. My toxicology report showed that I had an infection so I had emergency surgery this April, 2007. They removed some hardware from my shoulder-three screws and three washers—and several sutures. The doctors were as surprised as me—they didn't know the sutures were still in there—your body is supposed to absorb them within a few weeks. It had been three years!

After my surgery, my VA doctor told me that the sutures had caused my infection and there might even be some left inside me. I didn't know they were Panacryl sutures until I read the surgical report that I needed for insurance purposes.

I started to do some research. I went online and looked up 'common problems with Panacryl sutures'. That is when I read all the problems associated with this product—they don't absorb and they cause infections.

More News
I went through a lot and needing another surgery was not fun. Now part of my bone is infected—it is dead. The doctors have already told me I am a candidate for shoulder replacement; it is just a matter of when and where. Right now it is a matter of how much pain I can take; I currently take painkillers but try not to take them all the time.

When I do have surgery I won't be able to continue my job. (I am a mechanic and work on helicopters.) Once I have surgery my maximum capacity to lift will be 5-15 lbs, so I am trying to hold off surgery for as long as I can.

I was shocked when I found out that Panacryl sutures should have been taken off the market years ago. I didn't know a medical product could be that bad. How could a manufacturer know that something is substandard yet still market it? I guess the makers are only interested in revenue—a small lawsuit is nothing compared to all the revenue they've made.

Then I went online and found a lawyer through your website."