"I work in the hospital where my mother-in-law had surgery so I know we used Panacryl sutures," says Stephanie Neiferd. "The surgeon couldn't believe how many sutures he pulled out of her—he was furious."

"She had a hip replacement 10 years ago and was doing well but then her hip started draining," says Neiferd. "She was hiding it from us because she didn't want to go into assisted living." (Stephanie and her husband had finally found a good 'independent living' arrangement for Evelyn.) 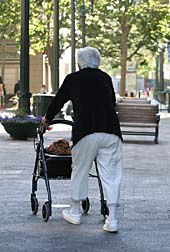 "After the surgery, Evelyn kept saying that she felt something 'funny' in her hip. The doctor thought he snipped something, like a nerve. She complained all those years about her hip, that it didn't feel right.

More News
"By the time we found out how serious it was, she had a nasty infection in her right hip. She was using pads on the wound and throughout the apartment there was orange leakage. She was very independent up until we took her to the hospital. Evelyn was afraid she wouldn't come out. She had just turned 87 but she was healthy apart from this. She had not been to a doctor since 2002—that's why nobody had noticed her hip. When she finally saw her regular doctor, he was shocked at how quickly she had deteriorated.

We took her to the hospital and the orthopedic surgeon was shocked and very angry with these Panacryl sutures, made by Ethicon. 'I kept pulling and pulling and they kept coming,' he told me. He put her on a heavy course of antibiotics but she went downhill fast and passed away February, 2007.

I haven't seen her death certificate but I attribute it to Panacryl sutures."

Posted by
mary roman
on December 10, 2013
needed a second surgery to remove panacryl sutures 2004/ 2005. I was never informed of a recall, just learned of it in the last year when I feared internal sutures would fail me again in another surgery I was facing. I did attempt to get legal consult through this site once before but the firm that responded said they had excepted all the cases they intended to. I am hoping to hear from another with experience with panacryl suture malabsorption. Thank you