After several abdominal surgeries as a result of constant infections, Nancy Fried's surgeon pulled a Panacryl suture from her incision. "This is what has caused your infection and why the incision wouldn't heal," he said.

"In 2003 I had surgery for stomach adhesions and in the process the doctor punctured a small bowel," says Fried. "I was sent home but the pain was so severe that I went back to the hospital that night. My temperature was 104 degrees. I had a staph infection and stayed in hospital for more than three weeks. During that time my sutures were removed and I had surgery to repair my bowel -- I had an incisional hernia, apparently quite common with a punctured bowel; it left me with a large incision and drainage tubes coming out of it -- not very nice.

After I was healed I had to get the hernia repaired; they used Panacryl sutures. I was okay for about six weeks but then I had yet another hernia. It kept getting infected -- I had to get the sutures taken out again! The surgeon would open me up again and take them out or they would poke through my skin. 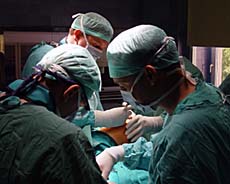 The last surgery was December 26th 2006 and in January of this year, the incision was opened again and the surgeon pulled out a suture that must have been at least five inches long -- it was blue and really thick.

That is when he told me that the Panacryl sutures were the reason for these constant infections. All this time I had a hole in my stomach, and a piece of skin would pop out from this hole if I sneezed, like a cork popping out of a bottle. The infection kept draining and the sutures wouldn't let anything heal. I had to keep packing the site of the infection with gauze and an antibiotic strip. This has been a problem, on and off, for three and a half years!

I am disabled with back problems and this has been an added hardship for me. Now I have another hernia that needs to be repaired but it has also entangled in my small bowel. They don't want to operate again because I have had so many surgeries, even though it is bulging and I am in so much pain. My doctor said I would have to wait at least six months before anything can be done. The small bowel is being pinned, wrapped around the hernia and if the hernia blocks my bowel, this could be life-threatening. So here I sit, not knowing what to do.

As well, I have had to pay for a good portion of these surgeries -- I feel that I have been royally shafted from this product -- these Panacryl sutures. I don't know where to turn anymore.

If you or a loved one has suffered infection or required additional surgery as a result of the use of Panacryl Sutures, please contact a [Panacryl Sutures] lawyer who will evaluate your claim at no charge.
Request Legal Help Now