"I'm a hairdresser, so I'm on my feet all the time," says Carrie. "But there are some days that I can't even stand up straight. And the pain never goes away." When Carrie had a Caesarian section, her doctor used panacryl sutures. While panacryl and vicryl sutures have both been recalled, it is believed that many still remain on hospital shelves and have been used in recent surgeries.

Many patients like Carrie are seeking legal advice due to serious post-surgery complications including life-threatening infection and so called "spitting" sutures, where the body forces the sutures to the surface of the skin. 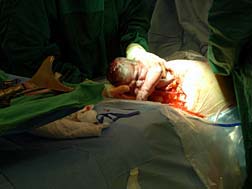 A Walking Time Bomb
"After my Caesarian, I was having pain in my side. The clinic did tests and tests, even exploratory surgery. At first they didn't find anything. I was starting to think 'Am I crazy?'"

"Then my husband and I decided to try to have another child. I went to the doctor to have my tubal ligation reversed. It was going to be routine surgery. But while I was under [anesthesia] the doctor found a baseball-sized pocket of infected stitches that didn't dissolve, and another one the size of a golf ball. The infected stitches had been walled up by scar tissue. He said that was my body's defense to keep the infection from spreading."

"The doctor said if I had been in a car crash or even hit in the stomach, the infected pockets could have burst, sending infection through my whole body. It could have killed me. He said I was a walking time bomb."

"Then he said: 'I want to apologize for all the doctors before me,'" who hadn't been able to find the source of the problem.

Painful Aftermath
Before Carrie had come out from under anesthesia, her surgeon had consulted with her husband and advised that it wasn't safe to go forward with the reversal of Carrie's tubal ligation, due to the potential of deadly internal infections. Instead, the surgeon spent hours in the operating room removing scar tissue and cleaning the area to prevent further infection.

More News
As a result, Carrie and her husband will not be able to have more children.

And Carrie's health problems are far from over. She will have to have more surgery and has been referred to see a hernia specialist to remove significant scar tissue.

Carrie has had to cut back her work hours to 3 days per week, due to chronic pain that her doctor attributes to nerve damage. "I don't like to miss work. It's not easy. I can't lift because of the pain. And if I get bumped there, or if I sneeze, I almost pass out."

"My kids know I'm in pain on that side and 'don't touch me on that side.' It has been hard on the family."

Asked about the possibility of undergoing more surgery, Carrie says: "I'm leery about it. If those stitches were being used, it makes you wonder what else is out there."

If you or a loved one has suffered infection or required additional surgery as a result of the use of Panacryl Sutures, please contact a [Lawyer] who will review your case at no cost or obligation.
Request Legal Help Now