Were you looking for Alere INRatio2 PT INR Professional Test Strips Recalled Due to Patient Deaths or Anti-Coagulation Medication or Coumadin (Warfarin - side effects) lawsuits?

The Alere INRatio Monitoring System is a handheld device used by patients to monitor amounts of the blood-thinning drug Warfarin. While these drugs prevent blood clots, too little or too much can be life-threatening—accurate monitoring is crucial, especially if the patient is self-monitoring their blood levels at home. The INRatio2 system was recalled by Alere, the manufacturer, in 2014, after reports that patients could receive inaccurate results, particularly in patients who are on Coumadin or Jantoven. In July 2016, the FDA announced the Alere INRatio device will be discontinued.

Send your Alere INRatio Recall claim to a lawyer who will review your claim at NO COST or obligation.
GET LEGAL HELP NOW

Alere INRatio and INRatio 2 PT/INR Monitor Systems measure the speed at which a patient's blood clots when taking Warfarin (brand names Coumadin and Jantoven). The system uses an International Normalized Ratio (INR) test to compare the results of the patient's blood clotting. The test is conducted by healthcare professionals and trained patients/patient caregivers and is used to determine appropriate levels of warfarin to lessen the risk of a patient experiencing a fatal bleeding event.

Patients who were using the INRatio and INRatio 2 PT/INR Monitor Systems were receiving test results that differed from those they received from blood tests performed by their doctor or laboratory.

In May 2014, Alere Inc. initiated a voluntary Class 1 recall to its INRatio and INRatio 2 PT/INR Monitor System, and announced in December 2014 that patients with certain medical conditions should not be tested with the system. Alere had received complaints from patients on Warfarin whose at-home test results differed from those performed by a laboratory.

Specifically, a number of patients had a therapeutic or near therapeutic INR with the Alere INRatio2 PT/INR Professional Test Strip but a significantly higher INR (outside of therapeutic range) when performed by a central laboratory. In May 2014, Alere reported nine serious adverse event reports, three of which described bleeding associated with patient deaths.

Alere warned in its recall that the INRatio system could provide inaccurate results, i.e., that the AlereINRatio2 PT/INR Professional Test Strips may report an inaccurately low INR result. Further, patients with certain medical conditions, including anemia, elevated fibrinogen levels or unusual bleeding could result in lower INR results than expected. Inaccurate results could cause doctors not to make necessary changes to a patient's warfarin dosage, putting that patient at risk of a bleeding event.

Alere INRatio and the FDA

Shortly after Alere’s May recall theFDA explained in its safety warning significantly different test results between the Alere INRatio2 PT/INR Professional Test Strip and the local laboratory plasma INR test. According to the FDA, Alere received almost 19,000 reports of “incidents” from 2013 through 2014 about the INRatio Test Strips, although not all of those complaints were linked to the recall. 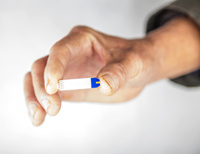 The FDA explained that, after Alere “proactively reported” its device concerns (and subsequent recall) to them, the manufacturer conducted a “thorough investigation” into these events. Since the recall, “Alere invested in the research and development of software enhancements to address the potential, in certain cases, of the system to deliver a result that differs from that of another measurement method….Although Alere is confident that the software enhancements it developed and submitted to the FDA at the end of 2015 effectively address this issue, the FDA notified the company that it believes the company’s studies do not adequately demonstrate the effectiveness of the software modification.”

The Alere device was approved for home use in 2002. Problems regarding inaccurately low readings were reported as early as 2005, when the FDA issued warnings to Alere for failing to act on complaints about erroneous results. But the INRatio Test Strips weren’t recalled until almost a decade after those first complaints.

As of March, 2016 InRatio had been linked to more than 1,451 injury reports, according to The New York Times. Earlier this year, FDA investigators concluded that the faulty devices had a “minimal” impact. False readings were also linked to 18 deaths in 2014 and 2015.

In July 2016 the agency announced that Alere initiated a voluntary withdrawal of the Alere INRatio and INRatio2 PT/INR Monitor System.

Warfarin-Alere Lawsuit Now that the blood-testing device is known to cause inaccuracies, attorneys are beginning to focus on Warfarin-related injuries. And there may be legal action against Alere.

Xarelto and Warfarin As well, an investigation regarding use of Alere that was used in the new blood-thinner Xareltoclinical trials, may have resulted in false data. As a result, Xarelto may have been shown to be more effective than it really was, and more effective than Warfarin. The INRatio Monitors were used in the clinical trial comparing Warfarin to Xarelto. Critics say false readings may have skewed results against Warfarin.

Data from the Xarelto clinical trial was also sent to reputable medical journals, according to the New York Times (May 2016). Lawyers for Xarelto plaintiffs claim that the esteemed New England Journal of Medicine left out critical data in the drug’s analysis. The Xarelto trial was led by Dr. Robert M. Califf, now head of the FDA.

Affected by the recall are:

INRatio Test Strips
INRatio Monitors
INRatio2 Monitors
Patients who have any of the following medical conditions should not use the INRatio and INRatio2 PT/INR Monitor system:
On its website Alere says it has “helped over 10,000 physicians provide Home INR Monitoring services to manage over 50 million test results from over 75,000 patients".

If you or a loved one has suffered similar damages or injuries, please click the link below and your complaint will be sent to a lawyer who may evaluate your claim at no cost or obligation.
Please click here for a free evaluation of your Alere INRatio Recall claim
Last updated on Sep-3-20

Waltham, MA: A merger originally gone bad between two medical device manufacturers, since rescued, sheds some light into previous problems Alere Inc. has had with its measuring devices and, specifically the INRatio blood monitoring system. Various plaintiffs embroiled in an INRatio lawsuit allege the expensive monitoring device was inaccurate, flawed and not safe for all patients.READ MORE
INRatio Proposed Class Action Settled Before Alere Lawsuit Could Proceed

Waltham, MA: An Alere lawsuit that had been proposed as a class action on behalf of litigants alleging injury from inaccurate readings from the INRatio blood monitoring device escaped trial when the parties involved agreed to a settlement at the eleventh hour. Briefings related to J.E. et al. v. Alere Inc. et al (Case No. 1:16-cv-11515, in the US District Court for the District of Massachusetts), and motions of dismissal put forward by Alere Inc. had been duly submitted, but the judge in the case had yet to rule on them when the settlement was announced.READ MORE
Alere Pushes for Dismissal of Home Blood Test Kits Class Action

Boston, MA: In response to plaintiffs' January motion to keep an Alere INRatio class action lawsuit alive, Alere recently pushed back with arguments that the court should dismiss the case.READ MORE

Posted by
Amer Bouso
on March 26, 2018
I have used Alere machines for few years until the last recall.
There was some doubt several times about the accuracy of the machines, but I have not suffered any serious injury from using Alere blood monitor.

((I would like to join your class action suit, if in progress.))
Thank you