Anti-Coagulation Medications May Cause Serious Side Effects

Were you looking for Coumadin (Warfarin - side effects) lawsuits?

Send your Anit-Coagulation Medicine claim to a lawyer who will review your claim at NO COST or obligation.
GET LEGAL HELP NOW 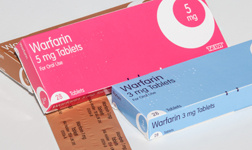 Anti-coagulation medications (also known as blood thinners) are used to prevent blood clots, which can result in deep vein thrombosis, pulmonary embolism and stroke. Because they prevent blood from clotting, however, patients may develop uncontrolled bleeding—including internal bleeding—from minor injuries. The longest-used blood thinner is Warfarin, known by the brand name Coumadin.

Like newer-generation anticoagulation medications, warfarin has been associated with an increased risk of uncontrolled bleeding. Unlike newer anticoagulation drugs, however, warfarin has an antidote, so patients who develop bleeding problems and seek medical attention may have the effects of warfarin reversed.

Among the medications that are included in the class of anticoagulation drugs are Pradaxa, Xarelto, Zontivity, Eliquis and Savaysa.

Newer-generation anticoagulation medications may also be associated with an increased risk of uncontrolled bleeding. Unlike warfarin, they do not currently have an accepted antidote meaning patients who suffer a bleeding event may not be able to reverse the effects of the event, potentially creating a life-threatening situation. Some of these medications have been marketed as easier to use than warfarin because their makers claim patients do not require blood level monitoring.

Lawsuits filed against the makers of some anticoagulant drugs allege either that the drug did not carry an adequate warning about the risks or that the drug was marketed as superior to warfarin when there was no antidote.

Pradaxa's label does carry a warning about the increased of bleeding events in patients. Some concerns have been raised, however, that Pradaxa was marketed as being superior to warfarin, even without an antidote.

The Pradaxa label does include a warning about the increased risk of bleeding events in patients. The concern, however, is that Pradaxa was allegedly marketed as being superior to warfarin even though there was no antidote to the uncontrolled bleeding.

In May 2014, Boehringer Ingelheim announced a $650 million settlement to resolve around 4,000 lawsuits alleging patients were seriously harmed by the use of Pradaxa.

Attorneys expect that more Xarelto lawsuits will be filed alleging patients were not properly advised of the risks associated with the medication.

Other newer-generation anti-coagulant medications include:

Zontivity, known generically as vorapraxar, is a new drug approved for use in 2014. Early trials of the drug were reportedly changed and one trial was reportedly stopped prematurely because the trials suggested an increased risk of severe bleeding or intra-cranial hemorrhage (bleeding). According to the FDA, the drug will carry a boxed warning concerning the risk of intra-cranial hemorrhage.

The Alere INRatio and INRatio2 PR/INR Professional Monitoring Systems are used by healthcare professionals to monitor the effects of warfarin on a patient's clotting time. The systems determine the International Normalized Ratio (INR) of the patient's fresh capillary whole blood, which shows how quickly the patient's blood clots.

On December 8, 2014, Alere announced a class 1 recall in the form of a correction letter, warning that certain medical conditions should not be tested with the INRatio and INRatio2 systems. In its announcement, Alere noted that some medical conditions might result in incorrect results, specifically, inaccurately low INR results. Conditions include anemia with hematocrit less than 30 percent, conditions with elevated fibrinogen levels, chronic inflammatory conditions or severe infections. Inaccurate INR results could lead to a doctor not making necessary warfarin dosing changes, putting the patient at risk of a bleeding event.

Patients on certain anticoagulant medications require regular testing to ensure their blood maintains its ability to clot in the case of injury. Doctors who do not provide adequate testing for patients who require it may be liable for medical malpractice if their patient suffers an uncontrolled bleeding event.

If you or a loved one has suffered similar damages or injuries, please click the link below and your complaint will be sent to a lawyer who may evaluate your claim at no cost or obligation.
Please click here for a free evaluation of your Anit-Coagulation Medicine claim
Last updated on Jun-18-15

New Orleans: Thousands of patients who took Xarelto have settled, through multi-district litigation, with Johnson & Johnson and Bayer for three quarters of a billion dollars. Plaintiffs allege that the manufacturers marketed the drug to physicians to prevent blood clots, but failed to inform them of Xarelto side effects, which could cause life-threatening complications such as internal bleeding, stroke and death.READ MORE
Last-Minute Maneuvering Underway Prior to Next Round of Xarelto Lawsuits

Philadelphia, PA: With three new bellwether Xarelto bleeding issue trials set to begin next month in Philadelphia, defendants Bayer Healthcare Pharmaceuticals and Janssen Pharmaceuticals Inc. are pushing back against attempts by plaintiffs to amend the master complaint in the Xarelto mass tort. In spite of the fact defendants won the first three bellwether trials - and stood by while a multi-million dollar award to a plaintiff this past December was voided in post-trial motions - Bayer and Janssen nonetheless feel that an amended master complaint so close to trial would significantly prejudice them in their attempts to present a coherent defense.READ MORE
Xarelto Verdict for the Plaintiff Overturned in Bellwether Case

Philadelphia, PA: A jury verdict in favor of the plaintiff in a bellwether Xarelto lawsuit that was in danger of being overturned was, indeed tossed - but not for reasons that had been previously speculated.READ MORE