Seroquel (quetiapine) is an antipsychotic medication originally used as treatment for schizophrenia and acute manic episodes associated with bipolar disorder. It has allegedly been linked to increased weight gain as well as serious Seroquel side effects including hyperglycemia and diabetes, tardive dyskinesia, neuroleptic malignant syndrome and birth defects.

Send your Seroquel claim to a lawyer who will review your claim at NO COST or obligation.
GET LEGAL HELP NOW

Seroquel is a member of a category of drugs called "psychotropics". It was first approved by the Food and Drug Administration (FDA) in September 1997 as a treatment for schizophrenia and in 2004 the antipsychotic was approved for the treatment of mania associated with bipolar disorder (manic-depressive illness) such as delusions, thought disorder, hallucinations, social withdrawal, lack of energy, apathy, and reduced ability to express emotion. (Bipolar disorder is a serious mental illness. According to the National Institute of Mental Health, it affects approximately 5.7 million adult Americans, or about 2.6 percent of the US. population age 18 and older every year and it is the sixth leading cause of disability in the world.) 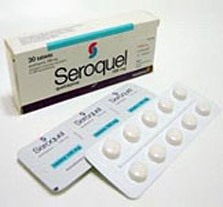 Seroquel is also widely prescribed "off-label", meaning it is prescribed for conditions other than those originally approved by the FDA. (Although it is not illegal to prescribe drugs off-label, it is illegal to market drugs for non-FDA approved uses.) Seroquel is also prescribed to treat post-traumatic stress disorder (PTSD), obsessive-compulsive disorder (OCD), general anxiety disorders, sleep disorders and depressive episodes associated with bipolar disorder, insomnia and other sleep disorders.

Seroquel Warnings and Side Effects

A later study reported the antipsychotic was associated with hyperglycemia, in some cases leading to ketoacidosis, coma, or death. In May 2005 the FDA ordered manufacturers of atypical (also known as 'second-generation'), antipsychotic medications--including Seroquel--to add another warning to the already existing black-box warnings, stating that the drugs are associated with an increased risk of death related to psychosis and behavioral problems in elderly patients with dementia.

In some cases, hyperglycemia and high blood sugar can lead to coma or death through dehydration, kidney failure, and cardiovascular disease. Diabetes mellitus can also lead to erectile dysfunction, blindness, gangrene and limb amputation.

In federal court, the Seroquel litigation has been consolidated in a Multidistrict Litigation (MDL), which is centralized in the U.S. District Court for the Middle District of Florida. About 5,829 of the lawsuits are currently in the MDL, where they are being handled together for pretrial proceedings. If the cases do not resolve during pretrial litigation, the MDL procedures require that the cases be sent back to the court where they were filed for trial.

If you or a loved one has been diagnosed with diabetes while using Seroquel, you may qualify for damages or remedies that may be awarded in a possible class actioin lawsuit. Please click the link below to submit your complaint to a lawyer who will review your claim at no charge or obligation.
Please click here for a free evaluation of your Seroquel claim
Last updated on Feb-27-14

Against his doctor’s advice, Don, age 47, stopped taking Januvia, saying he would rather deal with high blood sugar than kidney stones, blood in his urine and severe abdominal pains. READ MORE
Seroquel Side Effects for the Elderly

Seroquel is a neuroleptic indicated for the treatment of bipolar disorder—and like most drugs carries a host of Seroquel side effects, including diabetes, tardive dyskinesia and even birth defects. However, there is a little-known use for Seroquel off-label that concerned the daughter of one Alzheimer's patient for whom she was caring. READ MORE
Seroquel Side Effects a Weighty Issue

Among the various Seroquel side effects associated with the antipsychotic drug is weight gain—an event that could prove a problem for individuals and patients with existing health issues that might be exacerbated by an increase in weight. Seroquel isn't the only culprit in the atypical antipsychotic class. Others in the class are capable of packing on the pounds. READ MORE

Posted by
Donna Taylor
on July 1, 2021
I have terrible cramping I am on Quetiapine I am in so much pain and constipation dry mouth when I swallow can not get it down and i have trouble urine does not empty call Donna Taylor need a good Attorney
Posted by
Rebecca Lemmert
on January 31, 2019
I was taking seraquel for years until I was diagnosed with diabetes I had no idea that it caused it until I found out from my doctor now I have diabetes forever and diabetic neuropathy in my hands and feet as well. when I get up in the morning it feels like Im walking on glass I am in need of
Posted by
richard john tyczkowski
on September 21, 2017
i been very sick from Quetiapine, i get severe body jerks, it scares me so bad, it also caused Tardive Dyskinesia, also mit caused Leukopenia, which lead me to get small vessel vasculitis, now i'm very very sick,i'm on cancer drugs kemo drugs, there to try to stop all my blood vessels from being eaten and swell and leace blood, my arms and feet are black, when i say black i mean my feet are really black the skin and under the skin on my feet are black from no cirulation and leached blood,my arms to, it also caused very very bad pain,i can't walk cause my feet are in so much pain i cant put my weight on them when i do i just fall to the ground and have to pull myself back into the wheelchair,i turn 50 this year,if i never taken 400mg of quetiapine id stll be healthy and walking and in very little pain, now my life is over and i have a 6 year old baby girl who wants to grow up to be a doctor and fix daddy,shes my live i live for her,she means everything to me, please stay away from quetiapine it ruined my life and it will ruin your life, my medical bills run into the 1000s each month all from taking quetiapine, please everyone stay away from quetiapine,stay healthy and live longer, do not take this stuff, facebook me and i will show you all the pic's and all i'm going thru, thank you, stay healthy, take care and god bless,,,,,,,,,,,,,,,,,,,,,,,
Posted by
Sherrie
on May 10, 2017
I was prescribed Seroquel about 12 years ago...started on 200mgs. at bedtime. This dosage was doubled to 400mgs. a year later. In February of 2017, I went to the hospital for stomach pain and was diagnosed with an abscessed gallbladder with stones. I was lucky that I didn't die. In hospital, they removed me from the seroquel because of the pain meds that I was on. I haven't taken those meds since. I also gained a great deal of weight do to this medication. When I would forget to take the medication, I would start to feel strange and was unable to sleep...it appears that there is an addictive feature to this medication. I sincerely believe that my gallbladder issues and weight issues have a great deal to do with this medication, and I don't know who to call to help with the fact that I may have been damaged because of this drug. I have now been off the medication for about 3 months now...can only get 4 to 5 hours of sleep a night...Please help!
Posted by
Gary Irvin
on May 7, 2017
I am glad I found this page. Last year at this time I ony weighed 180 after increasing extercise and eating healthier. Walking to work and such. It was a struggle for mt to get under 200lbs so I was very thankful. Then I had an episode where it was thought that I needed to be on the Quietapine. I was prescribed Quietapine in August of 2016. I now weigh in excess of 2050lbs. Hell, my breasts are larger than a lot of women i see. I am very body concious and my weight is and always has been a problem for me. I saw my doctor regulurly and was weighed aboue every month. I did not think to ask about the weight as I had stopped walking to work so figured taking the buss and cutting down on exercise were the causes. I have now been walking 2 miles every day, eating healthier yet still expanding
Posted by
Cherie Duncan
on January 8, 2017
My son who luckily made it to his 25th birthday due to a life threatening blood disorder called Thrombotic thrombocytopenia purpura (TTP) believed to be causes by taking seroquel (quetiapine fumarate) for his bipolar disorder. TTP depletes the body's platelet count to drop dramatically by causing blood clots thru out the body.. normal platelet count is between 150,000 to 450,000. When I had to call for paramedics to take him to the hospital his blood work came showing his platelet count was only 10,000... he was immediately, intubated, a central line placed in his neck and spent 18 days out of the 32 days in ICU. He received plasmapheresis treatments for treatment nearly the entire time he was hospitalzed. He received the average of 544 bags of plasma and over 54 bags of blood while getting the plasmapheresis treatments...he was lucky, he survived this but not without consequences he is still dealing with..

There has been other documented cases of TTP being related to seroquel but no lawsuti has been started for the damaging effects of this RARE life threatening disorder..

Medical bills still continue to climb and initial expenses was near $700,000...

Google Seroquel and ttp cases and you will find my sons cases in Tucson.

Any advice for an attorney would be grateful as to its been almost a year since this happened.( January 30th, 2016).. statue of limitations only gives me 2 years to file...