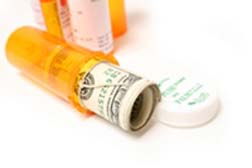 According to the UK Press Association, AstraZeneca set aside $203 million to resolve approximately 18,000 claims in the US that Seroquel, a schizophrenia treatment, caused diabetes and other serious Seroquel side effects. A further $270 million was reportedly put aside for other claims and to cover AstraZeneca's legal costs.

In August 2010, AstraZeneca said it settled approximately 17,500 lawsuits alleging Seroquel caused diabetes and other injuries for approximately $200 million. The lawsuits alleged the drug maker failed to adequately warn patients about the drugs' risks.

Further eroding AstraZeneca's profits are the effects of generic competition.

Meanwhile, an advocacy group called Taxpayers Against Fraud Education Fund alleges that the pharmaceutical industry is the number one source of Department of Justice (DOJ) fraud-related settlements. Number one on the list of pharmaceutical companies to settle with the DOJ was Allergan Inc., which paid $600 million to settle allegations of illegal marketing of Botox.

Second on the list was AstraZeneca, which paid approximately $520 million for the alleged illegal marketing of Seroquel.

More SEROQUEL News
Marketing of drugs is not illegal. What is illegal is marketing drugs for uses that have not been approved by the US Food and Drug Administration (FDA). Although Seroquel is approved to treat schizophrenia and bipolar disorder, it is not approved for use as a sleep aid, or to treat post-traumatic stress disorder or obsessive-compulsive disorder. It is also not approved for use in children younger than age 10, according to the US FDA-approved medication guide.

A study published online in BMJ (09/22/10) suggests that Seroquel is linked to an increased risk of blood clots. According to the study, of the patients included who were diagnosed with venous thromboembolism (VTE), 8.3 percent had received an antipsychotic medication in the two years prior to diagnosis, compared with 5.3 percent of those not diagnosed with VTE. The highest risk of VTE was found in patients who took quetiapine (known by the brand name Seroquel).

Exactly why antipsychotic medications were associated with an increased risk of venous thromboembolism is not known.

Posted by
Allison Biszantz (aka Allison Strong, writer and disc jockey)
on December 10, 2015
See my Tardive Vlogs on International Bipolar Disorders Youtube channel.Tardive Vlogs Utube
Part 1: youtube.com/watch?v=nCOR_YVo-ks
Part 2: youtube.com/watch?v=TqfEX8jl-Zs
Blog:
Blog: ibpf.org/blog/move-over-movement-disorder
I'm prediabetic and have Tardive Dyskinesia.
Hi. I've been on atypical antipsychotics since 2000, when I was put on Seroquel at high doses. When the metabolic side effects (huge weight gain, an eating disorder program threw me out for gaining four pounds over a weekend when I traveled to a home with lots of ice cream and goodies) Became to difficult and shameful, I was switched to Geodon. I'd been on top dose of Seroquel for seven years. After a year of Geodon and seven years of Seroquel I came down with Tardive Dyskinesia, a stubborn case that wasn't easily treated with Cogentin. For three years I could not sign my name. People regarded me with fear in their eyes. I went from doctor to doctor, encountering sexism, judgement for the benzos I took that were helping some, labeling, (a Cleveland Clinic neurologist said it was psychosomatic and snapped my file shut and left the office in three minutes) and Ignorance. You have to realize there are many different movement disorders and not all neurologists wish to deal with the mentally ill. I wrote a blog in the ibpf.org website called "Move Over, Movement Disorder." In addition, see my Tardive Vlogs

According to NAMI's latest statistics, 40-60 percent of those on atypical antipsychotics for over a decade will get TardiveDyskinesa. But that's not all. I now am prediabetic. I lift weights, I do cardio daily. I am thin and muscular. I am on Metformin. I'm doing a research study with a personal trainer/holistic healer from Uruguay to see what holistic approaches, such as acupuncture, herbs to silence the cries for sugar and other approaches will slow down, delay or prevent me from progressing to full blown diabetes. Stay tuned.

Posted by
nicholas harbert
on November 13, 2010
I have been on 600mgs. of Seroquel. for over 5 years. IN the last six months I have lost a small a mount of wieght and 195 to 180. Don't fell very good and am very thirsty and urinate on cammand. HELP!