Plane crashes can can be serious and even fatal events. The cost for those who have been affected by a plane crash, including medical costs and loss of wages, can be financially and emotionally devastating.

Send your Airplane Crash claim to a lawyer who will review your claim at NO COST or obligation.
GET LEGAL HELP NOW

According to the National Transportation Safety Board (NTSB), in 2005 there were 1,670 general aviation accidents involving 1,688 aircraft. Of those plane crashes, 321 were fatal, resulting in 563 deaths. This represents a two percent increase in fatal general aviation accidents from 2004 and a one percent increase in total number of fatalities from 2004.

Statistics claim that it is four times safer to fly in a plane than to drive a car. When an airplane does crash, however, the consequences are often catastrophic. Plane crashes are attributed to mechanical failure, defective parts, design flaws, pilot error, weather influence, air traffic controller error, bird strike, onboard fire, lack of fuel, terrorism, sabotage and other causes. 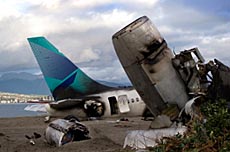 Personal planes and charter plane operations are becoming more popular as the price of planes becomes more economical and travelers seek convenient alternatives to large commercial flights. However, the safety risks have yet to be measured.

Furthermore, as reported by the Associated Press, the NTSB says that fuel exhaustion—running out of gas—was either a cause of or a factor in 238 small plane crashes in the US in the past five years. In total, 29 people died in small plane crashes linked to fuel exhaustion. The NTSB also says that from 2004 to 2008 there were 8,016 civilian plane crashes with 2,640 fatalities. In 75 percent of those crashes, pilot error was to blame. Civilian planes do not include commercial or military flights.

If a charter plane operation or a civilian plane has limited insurance, they may not be covered to pay damages incurred in an airplane crash, such as loss of life, loss of income, crippling injuries or traumatic stress.

If you or a loved one has been involved in an airplane crash, you may qualify for damages or remedies that may be awarded in a possible airplane crash class action lawsuit. Please click the link below to submit your complaint to a plane crash lawyer who will review your claim at no charge or obligation.
Please click here for a free evaluation of your Airplane Crash claim
Last updated on Apr-4-14

The Asiana Airlines Boeing 777 that crashed Saturday morning while landing at San Francisco International Airport has left two people dead and 182 people sent to hospitals, 50 of whom are in critical condition. Reports from various sources say it is “incredible” and “lucky” there are so many survivors.READ MORE
Fiery Small Plane Crash

A small plane crash near a residential area in Shirley has left one person dead and two others taken to hospital with burns. It is not yet known whether the deceased was the pilot.READ MORE
Navy Jet Crash Sets Fire to Apartments

A Navy jet that crashed into an apartment complex sent at least five people to hospital with injuries. One victim is believed to be one of the pilots—the two pilots apparently ejected before impact—and one other is a civilian who suffered smoke inhalation from the burning apartment buildings. Other injuries have not yet been determined.READ MORE