Plane Crash: "The Whole Thing was on Fire"

The trouble with airplanes is that they are always falling from the sky. Want proof? Just google plane crash with today's date. There will always be one, or several…either a plane that has just gone down today, or the dramatic report of one that went down yesterday.

Yesterday it was in the city of Windsor, Ontario when a small plane experienced engine trouble shortly after takeoff and crash into a residential neighborhood, narrowly missing houses. Both occupants were burned, one seriously, as the plane erupted in a ball of flames on impact. 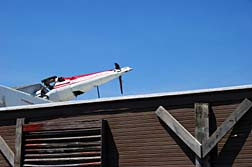 The loud bang that neighboring residents heard on an otherwise quiet Sunday morning at about 11am was thought to stem from an auto accident. At least that's what Windsor resident George Demarce thought, sitting in his backyard. He and his wife ran around to the front of their house expecting to find a car wreck, but were treated to the sight of a plane, its tail section still visible, engulfed in flames in the field across the street.

Hearing screams coming from inside the plane, Demarce instinctively grabbed his garden house and rushed across the road towards the flaming wreckage. By the time he reached the plane one of the occupants, who turned out to be the passenger, was emerging from the flaming wreckage, his clothes on fire, half his trousers already burned away.

"He was saying 'put me out, spray me, spray me…'" Demarce recalled to a reporter from the Windsor Star, as he turned his garden hose on the man. Demarce's wife Jan ran into the house to get some wet towels to comfort the injured passenger, as her husband turned his attention to the agonizing screams of the pilot, on fire and in the process of being burned alive, still trapped in the flaming wreckage.

"There was a guy stuck in the plane, half in and half out," said eyewitness Kelly Paquette, who had been driving with her boyfriend when they saw the plane 'wobble' in the sky and come down. "He was on fire. The passenger was yelling 'get him out, get him out.' It was really scary."

Demarce fights back the tears just thinking about. The heat was unbearable. Demarce's son Jason told the Windsor Star that the searing heat could be felt across the road at the Demarce home. "Flames were all around him," the elder Demarce said of the pilot. "His legs looked like they were stuck. I tried to keep the flames down around him so he could get out."

Miraculously the pilot, still screaming in agony, managed to free himself and emerged completely from the fireball that was the plane he had been flying. But he was on fire. "I told him to roll toward to me (sic)," Demarce said. "I kept spraying him," with the garden hose.

Jan Demarce comforted both men with wet towels until paramedics arrived moments later to take over. Both men were rushed to hospital in Windsor before being transferred to London. The names of the two men were not released. As of last night the passenger was in stable condition, whereas the pilot was listed in critical condition.

Transport Canada investigators were on the scene Sunday afternoon.

Demarce said that before being rushed to hospital the passenger revealed to him that the plane's engine had died shortly after takeoff from Windsor Airport. While trying to deal with the emergency the plane ran into some power lines, which precipitated the crash. Officials on the scene observed that the pilot was aware he was flying in a densely populated, residential area and did his best to avoid houses, finding a small field on which to crash land the plane no more than fifty feet from houses.

In the aftermath of the accident Jan Demarce observed her husband, the hero with the garden hose, sitting on his front porch fighting back the tears, a cigarette held in his still-trembling hand, staring at the charred remains of the small, single-engine plane that fell from the sky right across from his house on a beautiful Sunday morning.

Meanwhile, four people died in two separate plane crashes within 36 hours of one another over the weekend in South Jersey.

More PLANE CRASH News
On Sunday a former military jet trainer crashed into a grove of trees in Cumberland County shortly after taking off from Millville Municipal Airport. Wreckage was scattered over a 100-foot radius and both occupants were killed. The pilot was identified as William Crean, 65, of Sewell. His passenger, a 57-year-old male, was not identified.

The L-29 Delfin, a former Check training aircraft, went down just a half-mile northwest of the airport runway.

Meanwhile a home-built plane went down Friday night in Cape May county, killing both occupants. Officials with the Atlantic City Police Department identified the victims as Dennis McGurk Jr., 37, and his 34-year-old wife Oksana of Mays Landing. Police indicate the single-engine plane went down in the parking lot of the Belleplain Fire Department in Dennis Township shortly after 8pm Friday.

The National Transportation Safety Board, and the Federal Aviation Administration, is investigating both incidents.