What Caused the Montana Plane Crash?

While there have been conflicting reports surrounding the number of people killed Sunday afternoon in the horrific plane crash in Montana, the US Federal Aviation Administration (FAA) has confirmed that 14 people were killed. 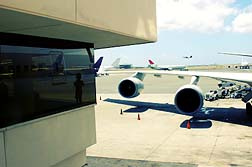 Previous reports, including one that ran in the early edition of the New York Times this morning, suggested that anywhere from 14 to 17 people were on board. The latter observation came from an aircraft mechanic who was on duty at the airport in Oroville. He suggested that he let as many as a dozen children from the plane use the restroom at the facility, which was the last stop the single-engine turboprop plane made before it crashed 3 hours later into a cemetery in Montana.

According to the New York Times an FAA spokesperson suggested also that 14 to 17 people were on board the plane, but as of a few minutes ago all the major media outlets appeared to have settled on a death toll of 14—7 adults and 7 children. There were no survivors.

The plane crash occurred Sunday at 3:26pm Mountain time. Eyewitnesses report seeing the plane wobble in the sky, and one witness noted that the plane was banked in a 90-degree vertical roll, with one wing pointing straight up, before the plane plunged nose-first into a wooded area of Holy Cross Cemetery and burst into flames.

According to various reports the plane was leased by a number of families who shared a vacation property, and was presumably shuttling the passengers to a ski vacation. The flight is said to have originated in Redlands, California and had flown to Vacaville, where it remained on the ground for just under an hour. It is not known if the plane took on fuel at the time.

From there, the Pilatus PC-12 took off for the short hop to Oroville, about 65 miles north of Sacramento. The plane took on no fuel at Oroville. It is here that many of the passengers exited the plane to stretch their legs and use the facilities.

It was about 11am Pacific time when the plane took off from Oroville for the presumed final leg of the journey, to Gallatin Field at Bozeman, Montana. The latter is about a dozen miles from the Bridger Bowl Ski Area in the Gallatin Mountains.

However, the plane never made it to Bozeman. At one point the pilot abruptly abandoned his flight plan and diverted to Butte, about 75 miles west of Bozeman and closer.

Why the pilot diverted may never be known. As the plane was a leased plane on a private flight and not a commercial enterprise, there was no black box on board monitoring the comments of the pilot. There is also no communications tower at Bert Mooney Airport at Butte, which is more of a self-serve facility with even self-serve fuelling capability.

Speculation, however suggests that when the pilot abandoned his flight plan and diverted to a closer airport, the need to land promptly was paramount. But why? Was there a sudden mechanical problem with the plane? Was the pilot low on fuel?

There are many questions, many of which will hopefully be answered by the FAA with an assist by the National Transportation Safety Board (NTSB).

One factor being looked at is the weight borne by the single-engine Pilatus PC-12, an aircraft built in Sweden and approved for civil aviation in the US in 1994. Specs for the aircraft cite a capacity for 9 or 10 passengers in some commercial configurations, although the specific plane that crashed yesterday afternoon was said to have approved seating for 12.

However, even the most conservative estimate of 14 passengers, represents 2 more people than the plane was reported to be rated for. That also suggests that, given speculation of a vacation, there would be luggage for two additional people as well.

Aviation experts agree that an aircraft is rated for number of passengers, and weight for specific reasons. A plane will handle differently and presumably burn more fuel if overloaded. And the sudden shifting of weight, whether the shift represents passengers suddenly changing their seat assignments, or the sudden shifting of gross weight such as luggage, could all have an impact on how the plane behaves in the air.

The specific Pilatus PC-12 did not appear to have any prior maintenance or safety issues. However, the New York Times was reporting this morning that according to the NTSB there have been 15 accidents involving Pilatus planes since 2001, six of which involving fatalities. There have also been reports that transportation authorities had put the Pilatus on watch for some ongoing issue with regard to the Pilatus engine.

More Plane Crash News
According to the FAA the doomed plane was registered to Eagle Cap Leasing of Enterprise, Oregon. It was not immediately known if the plane came with a pilot, or if someone else flew the plane.

NBC was reporting this morning that five members from one family were killed when the plane went down.

Eyewitnesses who saw the crash ran over to the crash scene immediately after the crash, but by then the fire was raging and there was nothing anyone on the ground could do. There were no injuries to people on the ground. Investigators report the fire burned for about five or ten minutes, and that rescue crews were on the scene within minutes.

The doomed plane crashed just 500 feet west of the runway at Bert Mooney Airfield at Butte. It is the third major plane crash in the US, in as many months.