The Asiana Airlines Boeing 777 that crashed Saturday morning while landing at San Francisco International Airport has left two people dead and 182 people sent to hospitals, 50 of whom are in critical condition. Reports from various sources say it is “incredible” and “lucky” there are so many survivors. 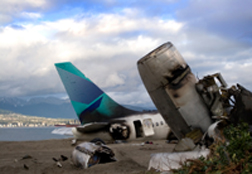 Flight 214 from Seoul had 307 passengers on board, including 16 crew members. The four South Korean pilots were all very experienced and “veteran pilots”, according to Asiana Airlines CEO and President Yoon Young-Doo, who also said that a mechanical error has "yet to be confirmed". He said the flight originated from Kansai International Airport in Osaka, Japan, stopped in Seoul and then carried on to San Francisco.

Eyewitnesses say the plane touched down several hundred feet before the beginning of the runway. They saw puffs of smoke when the main wheels or tail hit the ground, just before the plane erupted in flames. Passengers were seen jumping down emergency inflatable slides to the tarmac.

Some commercial pilots also saw the crash from nearby hotels or the airport. They concurred that the plane seemed to land unusually hard and short, then spun around the strip before they saw flames.

More Plane Crash News
The National Transportation safety board has launched a full-scale investigation. Investigators have collected the cockpit voice recorder and the flight data recorder. They say it is too early to speculate whether a flight-control problem was at fault or pilot error. Safety experts said the weather was excellent, with light winds and good visibility.

According to preliminary reports, the pilots were following a routine visual approach and didn't radio any problems or declare an emergency before impact. Investigators will likely be examining an instrument-landing system that wasn't operational at the time, and had been out of commission on that strip at the San Francisco airport for weeks due to runway improvement work.

Capt. Chesley Sullenberger, the pilot who landed the Hudson flight and now CBS News aviation and safety analyst, said it was possible that the ongoing construction at San Francisco International Airport would be examined as a factor in the Asiana crash.

If you or a loved one have suffered losses in this case, please click the link below and your complaint will be sent to an accidents lawyer who may evaluate your claim at no cost or obligation.
Request Legal Help Now