The Asiana Airlines Boeing 777 that crashed Saturday morning while landing at San Francisco International Airport has left two people dead and 182 people sent to hospitals, 50 of whom are in critical condition. Reports from various sources say it is “incredible” and “lucky” there are so many survivors.
Read [ San Francisco Plane Crash – Airport Also Under Investigation ]

A small plane crash near a residential area in Shirley has left one person dead and two others taken to hospital with burns. It is not yet known whether the deceased was the pilot.
Read [ Fiery Small Plane Crash ]

A Navy jet that crashed into an apartment complex sent at least five people to hospital with injuries. One victim is believed to be one of the pilots—the two pilots apparently ejected before impact—and one other is a civilian who suffered smoke inhalation from the burning apartment buildings. Other injuries have not yet been determined.
Read [ Navy Jet Crash Sets Fire to Apartments ]

The death toll in a Reno plane crash has reportedly risen to nine, with more than 50 people injured, some of them seriously. Initial reports said that three people died in the plane accident, in which a plane involved in a race plunged into the spectator stands. Killed in the airplane crash were the pilot, Jimmy Leeward, and eight spectators.
Read [ Death Toll Rises in Reno Plane Crash ]

At least three people have died and 50 more were injured in a horrific plane crash in Reno on Friday. The airplane crash occurred at an air race, and took the life of the 74-year-old pilot and at least two race spectators. Many of the injured suffered life-threatening injuries in the airplane accident, in which the plane plunged into the spectator stands.
Read [ Horrific Plane Crash Kills Three ]

Two single-engine float airplanes collided in mid-air Saturday afternoon near Trapper Creek, Alaska, killing four people. The pilot of the second plane (the only person aboard) made an emergency landing in Anchorage. This is the second airplane crash in Alaska this month.
Read [ Planes Collide Over Alaska leaving Four Dead ]

US Airways Plane Grounded After Hole Discovered in Fuselage 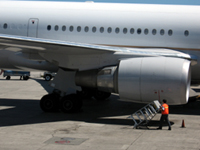 A pilot doing a pre-flight inspection to his commercial aircraft discovered a small hole in the exterior fuselage of the plane, CNN reported late yesterday. The US Airways 737-400 was loading for a flight when the pilot noticed the breach in the plane's fuselage, and alerted authorities.
Read [ US Airways Plane Grounded After Hole Discovered in Fuselage ]

People continue to speculate as to what caused a plane crash Wednesday near Long Beach Airport, killing five. According to a report from KTLA, the Beechcraft King Air plane had taken off from the airport, circled, and was trying to land, when the plane slammed into the ground, erupting into a fireball.
Read [ California Plane Crash Kills Five, Injures One ]

It has been two years since the tragic plane crash of Continental Connection Flight 3407 near Buffalo, New York. The airplane crash, officially blamed on pilot error, killed all 49 people on board the plane and one person on the ground. Although some lawsuits filed by the families of plane crash victims have been settled, many more are currently pending.
Read [ Lawsuits Pending in Buffalo Plane Crash ]

United Airlines has temporarily grounded no fewer than 96 of its Boeing 757 airplanes for what officials deemed as "unscheduled maintenance," CNN reported this morning. Although 15 flights were cancelled February 15—the day of the grounding—the airline indicated that operations should return to normal today.
Read [ United Grounds 757 Fleet for Unscheduled Maintenance ]
Page: 1  2  3  4  5     Next»