More Plane Crash News
A small plane crash near a residential area in Shirley has left one person dead and two others taken to hospital with burns. It is not yet known whether the deceased was the pilot. 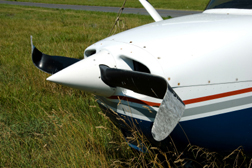 The single-engine propeller plane, a Socata TB10, known as "Tobago", hit the ground in a fiery crash just after it took off from nearby Brookhaven Calabro Airport, according to Federal Aviation Administration (FAA) spokeswoman Kathleen Bergen. Witnesses tried to douse flames with fire extinguishers and garden hoses.

The FAA said that the aircraft is registered to a man in Orland, Florida and is no longer manufactured. The front of the plane landed on a residential tree-lined street-- about 100 feet from the nearest house and several hundred feet from six other homes—with its tail plunged into a nearby construction trash bin, said a local resident. Nobody on the ground was hurt.