The Clarence Center plane crash happened almost 10 months ago, but according to attorney Ron Goldman of Baum, Hedlund Aristei & Goldman, wrongful death lawsuits are still being filed on behalf of the families of plane crash victims. Cases are in the process of being transferred to be heard by one judge. 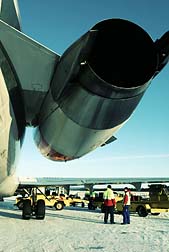 "The Judicial Panel on Multidistrict Litigation has ruled that a multidistrict litigation court be appointed in the Western District of New York," Goldman says. "No matter where a passenger lawsuit is filed as a result of this crash, it will be transferred to the Western District of New York, where it will be joined with the other cases for coordination and management for purposes of discovery and other pretrial proceedings.

"Unless cases are settled, it is likely that one or more 'bell-weather' cases will be tried. Only after the defendants face a jury trial for causing this tragedy, will cases then be sent back to their home districts for individual damages-only trials. Subsequent trials usually focus only on the damages (losses) of each victim."

Continental Connection Flight 3407, operated by Colgan Air, took the lives of 49 people on board and one person on the ground in February 2009.

Goldman, who is one of the attorneys appointed to the plaintiffs' executive committee overseeing the multidistrict litigation, says that the Court has indicated that the plaintiffs and defendants, Continental Airlines, Inc., Pinnacle Airlines Corp., Colgan Air, Inc., and Bombardier Aerospace, should enter mediation, and discussions are ongoing regarding when that mediation will take place. In mediation, the lawyers for the two sides attempt to reach a negotiated settlement. According to Goldman, this occurs individually with the lawyers for each separate lawsuit.

"The plaintiffs believe that there are grounds for a charge of willful and reckless misconduct, which lays the groundwork for punitive damages," Goldman says. "Until the discovery takes place and there is proof one way or the other, it is difficult to settle cases. If punitive damages are in play, then settlements will look different because the awards will be higher than if punitive damages are not in play."

For people who were affected by the plane crash, there is still time to contact an attorney and file a lawsuit. Goldman notes that people who do not contact lawyers are frequently disadvantaged when it comes to the ultimate outcome of their dealings with airlines.

More AIRPLANE CRASH News
"The ultimate objective of every member of the plaintiff's aviation bar that I know who regularly handles aviation cases, is to reveal the dangers in aircraft and in the aviation system to enhance the safety of aviation," Goldman says. "That's our major objective. It's not just about getting an award for the plaintiffs, it's about making aviation safer."

Ronald L. M. Goldman is an attorney with nearly 47 years of trial experience and a specialty in aviation accident law. He is also a former professor in aviation accident law. He and two other attorneys from his firm, John Greaves and Ilyas Akbari, were recently appointed to the Plaintiffs' Executive Committee "In Re: Air Crash near Clarence Center, New York, on February 12, 2009." His firm has handled over 500 domestic and international aviation disaster cases.