Prozac Pilot Comes out of the Cockpit

Oklahoma jet pilot Colin Hughes made the toughest decision of his life two years ago when he grounded himself after going on antidepressants. Does Hughes believe the skies are safer? Will fewer plane crashes occur if pilots come out of the cockpit and reveal that they have mental disorders, if the FAA allows them to take antidepressants while flying? 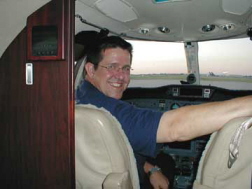 "I was laid off from my charter jet job out of Chicago in 2008 because of the economic downturn," says Hughes. "I applied for several positions and got a few offers. But I was also depressed. My wife, Jeanmarie, is a social worker and knows the signs of depression; she convinced me that I needed help."


"I have no idea how it came to be that pilots were deemed unsafe to fly if they were on antidepressants… I think it is due to ignorance and the stigma surrounding mental health issues. I have no idea why pilots are singled out"
Hughes thought about taking antidepressants and not reporting it to the FAA. He knew the consequences if he came clean: grounded for two years, with no compensation, no insurance.

Hughes doesn't believe that taking a "cocktail" of antidepressants can jeopardize passenger safety. However, he talked about it with his wife "and decided that it was wrong to lie. My medical certification was due in April 2008 and I knew the antidepressants would disqualify me so I didn't bother getting a physical. If I didn't ground myself I would fly with the guilt of the lie. We are churchgoers and one question we are asked as Mormons is whether you are fair and honest in your dealings with other people. Had I gone on meds and continued to fly and lie on my med application, I wouldn't be worthy. And I would also jeopardize my relationship with my wife."

Hughes grounded himself and the couple moved to Las Vegas, where he landed a job selling insurance and is branching out to aviation insurance. Now, with the new FAA ruling, "I'm looking forward to flying again, even though there are lots of hoops to jump through."

The first hoop requires that pilots be on medication and stable for one year. "I was first on two different meds, but I knew the ruling would specify one med, so my doctor changed my prescription to Celexa." (Of course doctor records are confidential: you don't have to reveal to your doctor that you are a pilot and he cannot disclose your condition without your permission.)

If pilots "come out" right now, even if they are stable on meds, they will still be grounded until they go through an observation period that could take weeks. For example, if a pilot was stable on meds for over a year but didn't report and continued to fly, the FAA will give him six months to come out with no threat of legal action.

"In my case, I take my medical exam and report on the form that I take Celexa," explains Hughes. "The doctor will call that 'deferred' and he will not issue me a medical certificate. So I would be grounded by the doctor. My medical form then goes to national HQ in Oklahoma City and they will send it to a special office in Washington DC. Some bureaucrat will send a packet back to me saying I have to:

- Take a series of psychological tests;
- Get medical records and notes from my doctor saying I have been on this med for over a year and that I am stable;
- Pay for these tests out of my own pocket;
- The results are sent back to Washington and the person handling the case will approve or not the pilot for flight.

"On top of that, the FAA medical certificate will say I am not approved for flight unless I meet certain requirements. This certificate is called a 'special issuance' that will set me apart from other pilots. So this could have an effect on being hired by a company, it could be a discrimination case because depression is protected under the Americans with Disabilities Act, which clearly states that mental illness is a disability.

"I know pilots who have gone off their antidepressant meds just so they can qualify for a medical and they are haunted by the question: have you ever suffered from depression? One pilot I know was on antidepressants as a teen. When he filled out his first medical report this question stumped him; he didn't want to lie but knew he had to if he wanted to continue flying. He continued flying.

"I have no idea how it came to be that pilots were deemed unsafe to fly if they were on antidepressants. This ruling has been enforced for 70 years. I think it is due to ignorance and the stigma surrounding mental health issues. I have no idea why pilots are singled out.

"For instance, a truck driver is barreling down a two-lane road and you are approaching the truck. You pass within five feet of each other with a closure rate of 145 mph, depending upon the speed limit. Now look at flight. I am up in the air at 40,000 feet and we have a closure rate of 1,000 mph; we have 1,000 feet of separation and on auto-pilot. Which is safer? And bus drivers carry a full load of passengers: are they disallowed antidepressants?

More AIRPLANE CRASH News
"This issue—letting pilots fly on antidepressants—has been going on for a number of years. There are lots of legalities and red tape and anytime you are dealing with the FAA, things don't move quickly. They have to decide what to do with the non-reporting pilots—will they get reprimanded? And they have to make sure the implementation is done in a safe manner because when you first go on antidepressants the initial period is not fun. For the first few weeks I was on Prozac I was totally miserable until I was switched to something else. I would definitely not want to be flying without the right med and dosage.

"Here is an example: When I first started the two meds (before Celexa), there was one night I went to bed and the room was spinning. I was holding onto the bed. Imagine coming in on final approach and having something like that occur. NO. We are really going for a ride! It is so important to be stabilized before flying on antidepressants.

"Is one year extensive? Yeah, it bums me out, but the FAA must be cautious and I think it is the right thing—and it will ease the public's fears."

You can visit the "Prozac Pilot" on his blog and check out his "Darth Vadar" video.

Click to learn more about LawyersandSettlements.com
LawyersandSettlements.com - A trusted, independent legal news provider bringing quality news and information on legal cases and lawsuits filed in the United States of America to its readers since 2002. Over 650,000 legal help requests including Accidents, and Drugs & Medical Cases have been forwarded to lawyers all across to the country.