Prozac (fluoxetine) is included in a group of medications called Selective Serotonin Re-uptake Inhibitors (SSRIs) that work by boosting serotonin levels in the brain, resulting in the regulation of mood, sleep and appetite. These SSRIs have been linked to serious side effects. Among the reported Prozac side effects are an increased risk of Persistent Pulmonary Hypertension of the Newborn (PPHN), congenital heart defects and withdrawal symptoms. Prozac is an antidepressant used to treat major depressive disorder, bulimia nervosa, obsessive-compulsive disorder, premenstrual dysphoric disorder (PMDD) and panic disorder.

Send your Prozac claim to a lawyer who will review your claim at NO COST or obligation.
GET LEGAL HELP NOW 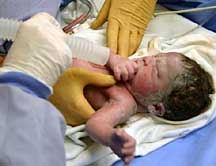 According to researchers, pregnant women who take antidepressants such as Prozac increase the risk of birth defects in their babies by more than half. Furthermore, women using SSRIs in the first 12 weeks of pregnancy—when many may be unaware they are expecting—were at a 40 percent greater risk of their baby suffering malformation. The risk of heart defects was 60 percent higher. The study, conducted by researchers in the US and Denmark, compared 1,054 women who took SSRIs during the first three months of pregnancy with 150,000 who were not prescribed them.

The Food and Drug Administration (FDA) approved Prozac in 1998 and it became the most widely prescribed drug for depression on the market. However, two years before the FDA approval, a 1996 study published in the New England Journal of Medicine found that women taking Prozac during pregnancy were twice as likely to deliver a baby with three or more "minor abnormalities" and poorer than average neonatal adaptation.

In 2004, Health Canada advised of potential adverse effects of SSRIs and other anti-depressants on newborns, including fluoxetine [Prozac]. The advisory was intended to increase awareness among mothers and physicians of the possible symptoms that may occur in the newborn, so that symptoms could be recognized and addressed immediately.

In May 2005, researchers from the University of Pittsburgh, estimated in the Journal of the American Medical Association, that in any given year at least 80,000 pregnant women in the U.S. are prescribed SSRIs, with Prozac being the biggest seller.

If your baby was born with heart birth defects and you took Prozac during your pregnancy, a lawyer may be able to help you. Please send your details to an attorney by clicking the link below for a free case evaluation.
Please click here for a free evaluation of your Prozac claim
Last updated on Feb-27-14

Posted by
California
on February 15, 2008
I took Prozac the whole time I was pregnant. I also took it the year before he was born and also had a daughter that died. She died 12 hours after she was born from an unknown cause other than she had resp. problems from the beginning.
Posted by
Pennsylvania
on August 16, 2007
I am sure that this may have a lot to do with my sons shortness of breath and pain in chest area he has always had a struggle keeping up with others his age.
Posted by
Arizona
on June 29, 2007
My husband and I have gone through 4 IVF cycles. On the second cycle we conceived and we were thrilled!! At about 7 weeks we went in for the ultrasound only to find out that the baby's heart was not beating. We were devastated!! We have tried to get pregnant 2 more times but it did not work. We have spent a TON of money as insurance did not cover any of the procedures but most importantly, we went through mental hell. It was the hardest thing to ever go through. We lost our baby due to a defective heart that never started beating.