As one of the world's leading anti-depressants, Prozac has been prescribed to more than 54 million people worldwide, including pregnant women. Studies have shown, however, that Prozac and other drugs in its class could be linked to serious side effects. Those Prozac side effects include a risk of so-called Prozac birth defects, including heart defects such as transposition of the great arteries, pulmonary stenosis and Primary Pulmonary Hypertension of the Newborn (PPHN).

Send your PPHN and Prozac claim to a lawyer who will review your claim at NO COST or obligation.
GET LEGAL HELP NOW 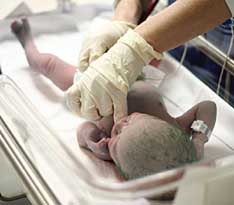 On July 19, 2006, the US Food and Drug Administration (FDA) released a warning that SSRI antidepressants can cause serious or life-threatening lung problems in newborns whose mothers took the medication while pregnant. The warning came after a study was published in the New England Journal of Medicine that showed infants were six times more likely to suffer Persistent Pulmonary Hypertension in the Newborn (PPHN) after being exposed to SSRIs such as Prozac. Babies whose mothers took Prozac while pregnant may also suffer withdrawal symptoms such as agitation, poor feeding, and insomnia.

PPHN occurs when the blood vessels in the lungs constrict, causing increasing pressure in the pulmonary artery, possibly resulting in death. Symptoms of PPHN include shortness of breath, chest pain, fatigue, and fainting spells. Many patients with PPH require a lung transplant. Even with treatment 20 percent of newborns with PPHN die. Symptoms of PPHN include rapid breathing and heart rate, difficulty breathing, or bluish skin.

The FDA has placed Prozac in Pregnancy Category C. This means that animal studies have indicated that there is a risk to the fetus, but human studies do not show that the risk of birth defects is greater than the risks involved in discontinuing medication. They also warn that Prozac can be transferred to an infant through breast milk.

A study published in the July, 2011 issue of the Archives of General Psychiatry suggests a link between the use of SSRIs in the year prior to delivery and an increased risk of delivering a baby with autism spectrum disorder. According to researchers, when women took an SSRI during the twelve months prior to delivery, the risk of having a baby with autism spectrum disorder doubled. The risk quadrupled when an SSRI was taken during the first trimester of pregnancy.

Prozac and Septal Defect: A septal defect is a hole in the wall of the heart, causing improper blood circulation. This forces the heart to work harder than it should to pump blood. Patients may require open-heart surgery. A study published in the journal Obstetrics & Gynecology (07/11), found that use of fluoxetine while pregnant was associated with an increased risk of isolated ventricular septal defects.

Prozac and Pulmonary Stenosis: Pulmonary stenosis involves a narrowing of the pulmonary valve, which results in decreased blood flow to the lungs.

Prozac and Transposition of the Great Arteries: Also known as transposition of the great vessels, this occurs when the aorta and the pulmonary artery, which carry blood away from the heart, are switched. Patients may require surgery to recover.

Prozac and Craniosynostosis: Craniosynostosis occurs when the sutures in an infant's skull harden prematurely, which can cause a misshapen skull, intracranial pressure, and a lack of growth in the child's head. A 2007 study, published in the New England Journal of Medicine (06/28/07), found a link between the use of SSRIs during pregnancy and craniosynostosis.

Prozac and Cleft Palate: A cleft palate occurs when the parts of the skull that form the roof of the mouth do not join. This can cause problems with feeding, speech and breathing and can also cause ear infections and hearing loss.

Prozac and Cleft Lip: A cleft lip is a facial defect affecting the infant's upper lip. It can cause delays in speech and language.

Prozac and Club Foot: Club foot occurs when the bones, joints, muscles and blood vessels in an infant's leg and foot develop abnormally causing the foot to be turned inward and downward. This can cause pain and problems with mobility.

If your child was born with PPHN, PPH or other birth defect a lawyer may be able to help. Please click the link below to send your Prozac birth defects complaint which will be reviewed by an attorney at no cost to you.
Please click here for a free evaluation of your PPHN and Prozac claim
Last updated on Jan-3-12

Study Finds No Link Between Prozac and Stillbirth

A new study adds to the increasing confusion over the link between Prozac and birth defects. The study, which involved an analysis of the risk of stillbirths linked to the use of Selective Serotonin Reuptake Inhibitors (SSRIs) while pregnant, did not specifically focus on Prozac side effects, but did include drugs from the same medication class.READ MORE
Prozac Side Effects Highlighted in FDA Warning

The US Food and Drug Administration (FDA) recently issued an updated statement regarding Prozac side effects that can arise from a combination of the drug and linezolid, according to MedPage Today.READ MORE
Should Coffee Replace Prozac As Antidepressant for Pregnant Women?

Given that there is some concern about the risk of Prozac side effects, which could allegedly include Prozac birth defects, pregnant women may want to have alternatives to antidepressant medication during their pregnancy. Although the exact link between Prozac and birth defects is not clear, some studies suggest a link between the use of Selective Serotonin Reuptake Inhibitors (SSRIs) and the development of certain birth defects, including autism, septal defect and pulmonary stenosis.READ MORE

Posted by
Alabama
on December 8, 2013
I WAS ON PROZAC AT THE TIME OF MY PREGNANCY AND HAD A MISCARRIAGE. I LOST MY BABY. I WAS ALMOST 3 1/2 MONTHS PREGNANT. NOT ONLY HAVE I SUFFERED THE LOSS OF THE ONLY CHILD I WOULD EVER BECOME PREGNANT WITH, I HAVE TO LIVE WITH THE GRIEF AND DEPRESSION EVERY DAY OF MY LIFE.
Posted by
Washington
on February 16, 2012
My daughter was born prematurely and was sick from the moment she was born. One hospital almost let her die because they were more concerned with whether or not I was causing her illness and when I demanded we be transferred to a different hospital she was diagnosed with pyloric stenosis. At two months she got down to 4lbs and nearly died. Her development was delayed I'm sure as a result.
Posted by
Wyoming
on February 13, 2012
I was prescribed Prozac when I was 4 months pregnant with my second child. My daughter was born with a cleft lip. She has had 2 surgeries and will need more to reduce scar tissue. I have 3 children and she is the only one that was born with or has any defect.
Posted by
Colorado
on November 24, 2010
Medical bills for my daughters open heart surgery to repair an Atrial Septial Defect. She was also repaired at the same surgery with a rare and almost always deadly Left Pulmonary Sling. She was in and out of hospitals for the first 6 months of her life.
Posted by
North Carolina
on May 12, 2008
I was a nurse and took Prozac for over a decade. Now I am homebound and disabled because of seizures and thoughts of suicide and/or death that will not quit. It has taken over and rules my life daily. The doctor last told me it was residual side effects from the Prozac. What can I do?
Posted by
Ohio
on December 9, 2007
My daughter now suffers from hearing/speech problems, learning disorders and has never eaten well since birth. She also has tubes in her ears.
Posted by
Maine
on September 12, 2007
I took Prozac througout my pregnancy as recommended by my OB and family doc. My son was born with breathing problems and was on oxygen at birth. We were in the hospital for a week. Now he has asthma and was just diagnosed with autism last week.
Posted by
Georgia
on August 14, 2007
Our son was born two months premature. He was hospitalized for two months with heart and lung problems. He continued to have breathing problems after his discharge. He has also had a couple of seizures. We were never told that any of these problems could be due to the fact that my wife was taking Prozac. He has just started school so we do not know if he is going to have any learning problems.
Posted by
Texas
on July 1, 2007
Son born unexplainably 2 months early with apnea, low body temp and low blood sugar. After 1 yr diagnosed with diabetes and starting in Oct. 2006 began having siezures that the Dr. can not explain or detect. Siezures are progressively getting worse. I was prescribed Prozac before, during and after the pregnancy.