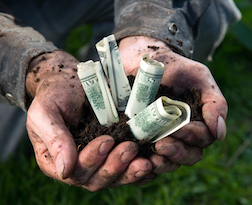 Prior to the law being signed, farmworkers only made overtime when they worked more than 10 hours a day or 60 hours a week. The law will allow a phased transition to the new overtime hours up to 2022 when the eight-hour overtime threshold will be in effect.

Meanwhile, another overtime topic that has been followed in the news remains murky: whether employees should be compensated for time spent donning and doffing special work-related gear. The courts have returned conflicting decisions regarding the issue of donning and doffing, although the recent ruling in the Tyson case backed workers' claims that they should have been paid more for time spent putting on and taking off safety gear.

More CALIFORNIA OVERTIME News
In a similar lawsuit, the Arkansas Supreme Court ruled in May that Gerber employees should be given $3 million for unpaid wages after the court found the company violated state labor laws by not fully paying for time spent putting on and taking off uniforms. Among the activities for which employees alleged they were not properly paid were changing into uniforms, changing into shoes that had to be kept onsite, lint rolling their clothing, and putting on protective gear. At the end of their shifts, employees clocked out before they took off protective gear, according to court documents.

The court found—in a split ruling—that donning and doffing constituted work, because the activities followed procedures Gerber developed and benefited from.

"Here, Gerber is accepting the benefit of the employees donning and doffing without providing proper compensation to the employees," Associate Justice Karen R. Baker wrote. "Further, the time the employees spend performing these mandatory activities is time that the employees are unable to use for their own purposes."

Click to learn more about LawyersandSettlements.com
LawyersandSettlements.com - A trusted, independent legal news provider bringing quality news and information on legal cases and lawsuits filed in the United States of America to its readers since 2002. Over 650,000 legal help requests including Employment Law Cases, and Workers Compensation Cases have been forwarded to lawyers all across to the country.