Known Defect Could Have Caused Crash of Hibernia-Bound Sikorsky Helicopter 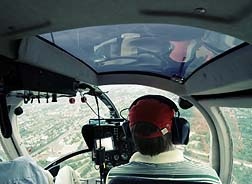 According to a report by the Canadian Broadcasting Corporation, Transportation Safety Board of Canada investigators have found a broken titanium mounting stud in the wreckage of the helicopter; wreckage that was retrieved from the bottom of the Atlantic Ocean earlier this week.

According to the CBC report, the problem of the mounting studs was known to Sikorsky, and on January 28, 2009 an alert was issued stating that the titanium mounting studs should be replaced by stronger steel studs within the year or within 1,250 flights. Cougar Helicopters, who ran the shuttle service for the Hibernia oil platform, located 200 miles into the Atlantic off the coast of Newfoundland, had reportedly not replaced the studs.

Apparently, a failure of the mounting stud could cause gear box problems, which is precisely what the crew had reported minutes before the helicopter descended into the frigid ocean.

More HELICOPTER CRASH News
The finding, made this morning and announced this afternoon, has prompted immediate action by the FAA, which issued a directive calling for the faulty part to be replaced on Sikorsky S92-A helicopters worldwide. And, that all Sikorsky S92-A helicopters in the United States remain grounded until the titanium studs are replaced with steel ones.

Despite the finding, the cause of the crash remains under investigation. When the wreckage was located in 178 meters – nearly 600 feet of water – most of the bodies of the passengers as well as the 2 crew were still strapped into their seats. Only 1 of the 18 people on board has survived. Robert Decker, a 27 year old ice spotter is in hospital recovering from his injuries, and is not yet strong enough to be interviewed by investigators. His account will no doubt play a vital role in determining exactly what happened during the final minutes of the flight.

The bodies of the dead passengers and crew were still inside wrecked helicopter when it located by sonar. A service was held in St. John's for the victims of the crash.