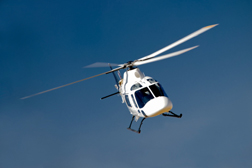 According to the Department of Public Safety (DPS), the helicopter crashed approximately 14 miles south of Hemphill. The two victims reportedly suffered non-life-threatening injuries in the crash, DPS Sgt. Beau Clark said. Both men were transported to a hospital after the accident.

Clark said that Christopher Tyree and Bradley Richards had flown to Tyree's lake house and the helicopter crashed when they were leaving. KTRE-TV reports that the two men told investigators that they felt the helicopter catch something when it was taking off and it ultimately started to spin.

The helicopter eventually landed on its side in water that was several feet deep, the news source said.

Lynn Lunsford, a spokesman for the Federal Aviation Administration, said that the cause of the helicopter crash was being investigated.

According to the National Transportation Safety Board, there were 1,395 civilian aviation accidents through the first 11 months of 2010.