A lawsuit has been filed following a 2008 helicopter crash in which four people died. Two other lawsuits have also been filed against the Federal Aviation Administration (FAA) related to that helicopter accident. 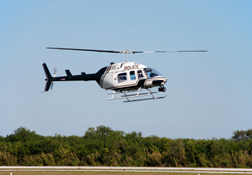 The 2008 helicopter crash involved a Maryland State Police helicopter. One person survived the crash. That person, Jordan Wells, has now filed a $50 million lawsuit against the FAA, alleging that the air traffic controllers who guided the helicopter were negligent. Wells, who was 18 at the time of the crash, lost her leg because of the helicopter accident. Her lawyer, as quoted in the Gazette (12/13/10), said Wells is physically scarred and suffers from post-traumatic stress disorder. Since the accident, Wells had to learn to walk again.

The lawsuit alleges that the air traffic controllers gave the pilot dated information regarding weather conditions, did not guide the pilot to safe landing and did not alert paramedics to the scene of the crash, according to the Gazette.

The helicopter was sent out after Wells and her friend, Ashley J. Younger, were involved in a car accident. After the helicopter crashed, Wells was stuck in the woods for two hours under the helicopter because paramedics had difficulty finding the crash site.

More HELICOPTER CRASH News
Meanwhile, investigators have released information from a helicopter crash investigation into a crash that killed nine people. The National Transportation Safety Board (NTSB) blamed the crash, which occurred while the helicopter took off from a wildfire staging area in 2008, on the weight of the helicopter and a lack of oversight from the FAA.

Seven firefighters died in the crash in California. They were on their way to fight a massive forest fire in the woods. Lawsuits have been filed against the helicopter manufacturer and the engine manufacturer.