To quote a favorite Glen Campbell song, he was a "lineman for the county." But he didn't drive the main road, he flew above it. Sadly, Gary L. Bland will fly no more following his death in a helicopter crash the day before Halloween in Tucker County, West Virginia. 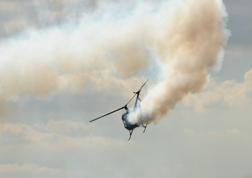 The Charleston Gazette and the Associated Press reported November 2nd that a number of linemen who worked for PAR Electrical Contractors based in Kansas City, Missouri, had just finished installing wire for the Trans-Allegheny Interstate Line (TrAIL) when the helicopter accident happened. Doug Colafella, a spokesperson for Allegheny Energy, told the Gazette and the Associated Press that the aircraft went down along the right of way of the power line just after the men had finished connecting wire to a transmission tower.

It is not known if the helicopter's rotors may have become entangled in the wire. The causes of such helicopter crashes are always thoroughly investigated by authorities, as is the case here. Both the National Transportation Safety Board and the Federal Aviation Administration are investigating the tragic accident that killed one and injured three others out of a crew of four.

More HELICOPTER CRASH News
Besides the deceased, there were three others working that day—two linemen and the pilot—out of a crew of four. The survivors were initially taken to a hospital in Morgantown but have since been released, the Gazette said. They were identified as Ryan Joseph Lange, 31, of Portage, Indiana; Jeffrey M. McKay, 34, of Olive Hill, Kentucky; and Robert A. Rogers, 40, of Dacula, Georgia. Colafella, speaking for Allegheny Energy, was uncertain which of the three survivors was the pilot.

Bland was 52 at the time of his death. He hailed from Georgia.

Such helicopter crash news is always disconcerting, regardless if the accident happened during a commercial or professional flight, or a recreational excursion. In this case the linemen worked for PAR Electrical Contractors, while the pilot flew for Winco Power Line Services, based in Aurora, Oregon. Both firms are serving as subcontractors for the massive TrAIL hydroelectric project.

The latter is a 500-volt line that will extend from Pennsylvania to northern Virginia.