The investigation into a serious helicopter crash that took 17 lives in March of 2009 off the coast of Newfoundland has been put to bed with the release of a final report by the National Transportation Safety Board (NTSB). Not only is the NTSB calling upon the Federal Aviation Administration (FAA) to implement new rules with regard to helicopter mechanical safety and flights over bodies of water, but it also appears as if the blame for the crash lay squarely with the manufacturer. 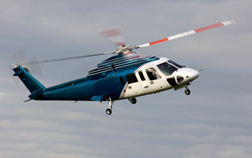 According to the CBC on February 9, the recommendations came following an extensive helicopter crash investigation into Cougar Helicopters Flight 491, which crashed off the coast of St. John's, Newfoundland. The Sikorsky S92A was ferrying staff to offshore oil rigs when the helicopter's gearbox suddenly lost oil pressure and the pilot had to ditch the helicopter in the sea. A total of 17 people drowned, including the pilots and 15 passengers.

There was one survivor of the helicopter accident.

The NTSB has recommended that any gearbox losing oil pressure should have the capacity to run dry for 30 minutes before failure. In the case of Flight 491, the elapsed time between the onset of a warning light indicating trouble to the pilot and the ditching of the aircraft in the sea was a mere 11 minutes.

It has also been recommended that helicopters flying over open water be equipped with floatation devices, and that any passenger wearing a flight suit have breathing apparatus available.

The helicopter crash victims might have been spared had these precautions been in place, the report noted. And while an NTSB spokesperson said that the manufacturer, the regulator and Cougar have largely addressed the problems that led to the helicopter accident, risks still remain.

Breathing apparatus is now provided for crews and passengers on fights off Newfoundland, however not necessarily on all flights where flight suits are worn.

In further helicopter crash news, much has been said about titanium studs used to secure the main gearbox. Concern extends to a near miss more than a year prior to the Newfoundland helicopter crash, when a Sikorsky S92A ferrying Australian offshore oil workers narrowly avoided tragedy when two titanium studs securing an oil-filter assembly to the main gearbox failed, and the aircraft experienced catastrophic oil-pressure loss. Luckily, in that particular helicopter accident news there was a happy ending—the pilots were close enough to dry land to make a return to terra firma in the nick of time.

Months later, on January 28, 2009, Sikorsky Aircraft Corp. issued an alert recommending that titanium mounting studs be replaced with studs fashioned from steel on every helicopter within one year or 1,250 flights.

More HELICOPTER CRASH News
The Newfoundland helicopter crash less than two months later was found to have been caused by the failure of titanium mounting studs on the doomed helicopter's main gearbox filter bowl. Mike Cunningham, of the NTSB, said in a statement that the pilots were warned of a sudden drop in oil pressure, but would have no insight as to why.

"What they didn't know is that two of the three main gearbox mounting studs had broken," Cunningham said. "And when they broke, the helicopter lost oil rapidly and the gears began to overheat. It crashed into the Atlantic just 11 minutes after the first indication of trouble."

When the helicopter crashed into the ocean, there was no breathing apparatus for the passengers. Nor was the helicopter equipped with a flotation device that might have allowed the victims to survive until rescue. It was reported that the Sikorsky S92A still cannot run with a dry main gearbox for 30 minutes. It is not known if a lawsuit exists on behalf of the victims.