The bad news continues for the families of the men and women missing in yesterday's helicopter crash in the north Atlantic. So far, only 2 of the 18 people on board have been found, one person is dead and the other remains in hospital in critical but stable condition.

The S-92 Sirkorsky helicopter had been ferrying employees to the Hibernia oil rig, located about 200 miles out to sea, off the coast of NewFoundland, Canada when it went down. 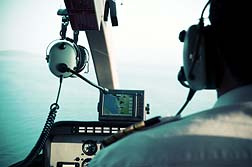 Apparently the pilot had reported technical malfunctions shortly after take-off and issued an emergency alert. He then turned the helicopter around and headed back to St John's, their departure point, at 9:18 local time.

But as we know, they didn't make it. The chopper went down about 37 minutes later, at roughly 45 nautical miles off the NewFoundland coast. About 10 minutes after the crash, the wreckage was spotted by a passing plane. Cougar Helicopters, the company that operates the transport helicopters, had another helicopter at the scene of the crash almost immediately. Two inflated life rafts were spotted, but no one was onboard.

More Helicopter Crash News
According to Canadian rescue officials, the 2 crew and 16 Hibernia employees were believed to have been wearing survival suits equipped with automatic locating beacons. The suits can enable survival in waters like the north Atlantic for 24 to 30 hours. But the seas were reportedly between 7 and 10 feet high at the time of the crash, and the ocean temperature just above freezing. Officials believe that given the amount of wreckage seen at the crash site, the impact was sudden. Officials also reported that no signals were received from the locater beacons on any of the survival suits.

On Thursday afternoon, Major Denis McGuire, an official with the search and rescue coordination center of the Canadian armed forces and the Canadian Coast Guard, said that there were no indications of any further survivors, but search efforts would continue though to Friday. Sometime today the decision will be made as to when to call off search and rescue efforts.