It happened 55 miles out to sea, off the coast of St. John's Newfoundland, Canada, at about 8:00 am eastern standard time (EST) this morning. Eighteen people were being flown to the Hibernia Oil Platform, located 200 miles out to sea in infamously dangerous waters, when the S-92 Sikorsky helicopter they were flying in crashed into the Atlantic. 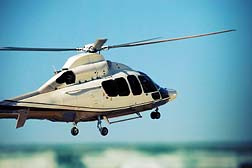 The pilot had issued a mayday just before 8:00 a.m., EST. According to media reports, he had radioed in technical problems prior to going down.

So far one survivor has been pulled from the sea, but 17 people remain missing about 30 miles out to sea. The survivor was rushed to hospital, but his condition is currently unknown. Sea temperatures were reportedly just above freezing Thursday morning.

Rescuers dispatched to the scene shortly after the crash had located 2 life rafts, but it is not yet known if anyone was onboard. The search for survivors continues.

Has the Rush to Make a Buck Reduced the Safety of Helicopter Flights?

In October, 2008 a medical helicopter crashed near Chicago, killing everyone on board – 3 adults and a baby. This was the ninth fatal helicopter crash in the US during the past 11 months, bringing the death toll to 35.

Sadly, many of these crashes are believed to have been preventable. Notably, medical helicopters have among the worst safety records. For example, the medical helicopter that went down in Chicago in October was flying at night but lacked the up-to-date safety equipment that would have warned the pilot about the proximity of towers and other dangerous obstacles. Consequently, the helicopter accidentally clipped a wire on a radio station, which sent it crashing to the ground.

Currently, there are more than 800 medical helicopters in use in the US, double the number used a decade ago. This is the result of increased private sector investment. Until recently, hospitals were the primary operators of the medical helicopters. However, the majority are now operated by commercial companies and in some cases, publicly traded companies, where the emphasis on profit is king. According to safety experts, the competition among the various companies for flight contracts has resulted in increased safety risks, including sending helicopters out in potentially unsafe weather conditions.

In an interview with the New York Times earlier this year, Paul Drucker, director for flight operations of Mayo Clinic Medical Transport in Rochester, Minnesota, said "The big elephant in the room is competition and competition about the number of flights that you need to make a profit."

Remarkably, the FAA has only acted on one of the 4 recommendations, believing that the industry is capable of self-regulation. However, given that a brand new helicopter with state of the art equipment could set its owners back more than $6 million, is the altruistic belief in self- regulation of safety likely to prevail? It didn't in the banking industry.

One has to wonder how many people need to die in preventable accidents before the government body supposedly tasked with overseeing the safety of the industry comes to the conclusion that is does have a role to play, and begins implementing some meaningful operating guidelines for helicopters, passengers and crew alike.