Digitek: "This Pill is Too Thick"

Sue took Digitek for about 10 years to control her irregular heart beat and palpitations and she was doing OK until last fall, when Sue believes she was given pills that were on the Digitek recall." I got my prescription by mail from Medco and right away, I felt that the pills were too thick," says Sue.

"I learn to feel everything because my vision is bad," Sue says, "so I poured some Digitek pills into my hand and made a comment to my husband that they were too thick. I just assumed the pills were smaller around and they had just changed the way it was made. 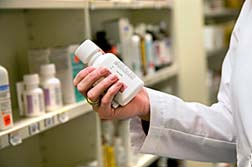 Not long afterward, my heart beat became worse and I didn't know why. I stopped taking my Digitek medication and then I saw my primary care doctor about it. I had just stopped cold turkey and I know it isn't the right thing to do but in retrospect it would be more dangerous if I kept taking it. I told my doctor about my symptoms and he said not to take anymore Digitek either. He put me on an alternate medication along with 3 other meds.

It took about nine months for my heartbeat to get back to a normal rhythm and the palpitations to cease. During this whole time I was a little bit upset, to say the least. I wasn't doing much of anything except going back and forth between my primary care doctor and my cardiologist.

Then I mentioned Digitek to my cardiologist and he advised me to go back on it: at this point I had been off it for 2 or 3 months. I did as I was told and started taking it again; that was early this year. He wrote a prescription for the same dosage and this time I got a local pharmacy to fill my script: the pills were back to the thin size—the same type that I had taken before the thick kind.

On April 18, Medco posted the Digitek recall on its website. I think I said a dirty word when I read it. I am really fed up with both the drug company and Medco because they never notified me personally. The message on Medco's site said it found some irregularities with the drug company and that they could no longer get it from this certain plant. Until they found another manufacturer, they would be distributing digitalis to their customers. I didn't receive anything from this pharmacy, nor will I ever use them again. I heard that the pharmacy was supposed to notify its customers of this recall.

More DIGITEK News
If I had taken all of those thicker pills, I believe that I would have died. And to this day, I don't feel very well. I took Digitek again for 2 weeks as my cardiologist advised; he was watching me closely and when I went back to his office I couldn't get my breath so he told me to stop taking it—on again, off again. Now I am completely off Digitek and this time for good.

Specialists and even some doctors don't have the time for you to ask them questions so I didn't find out if he believed the Digitek harmed me. But I believe it did. I went online to see if there was anything more about the recall; I didn't expect to find a Digitek lawsuit. But when I found out how many people have suffered, I decided to get involved in a lawsuit. This drug company shouldn't get away with it and they shouldn't be allowed to stay in business.