"Didn't Realize the Danger of Digitek until it Happened to Me"

Five years ago Janice was diagnosed with Atrial Fibrillation (A-Fib) and her doctor started her on a combination of Digitek and aspirin. "I was doing fine until I had a stroke last March and was hospitalized for two weeks," says Janice. "When I got home, I opened a letter from my pharmacist; it was a notice about the Digitek recall; why didn't my doctor or anyone in the hospital know about it?" 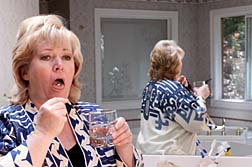 Janice said the recall notification "made me curious, to say the least." It got her thinking that she may have taken a double dose of Digitek. "Then I started reading in the newspaper and the Internet and even seeing on TV, all sorts of reports regarding Digitek—people getting sick and one man even died from it. They didn't say it was from an overdose but it got me worried—especially since I didn't have any heart problems for the past five years; I couldn't help but wonder if it caused my stroke.

I know it was saying patients with renal failure were in danger, but I don't believe that enough is known about side effects of drugs, especially when a manufacturing error occurs. Who is doing that kind of research?

"It is hard for me to remember the day it happened. I was at work and remember losing strength in my left hand and my vision was blurry. I managed to get into the restroom and that is when I fell down. Luckily a co-worker found me and told our HR director, who immediately came over and asked if I wanted to call an ambulance. Stubborn me, I said, 'No, just call my daughter.' I had no idea that I was in any danger; you don't imagine anything serious is happening to you until after the fact. Of course now I am paranoid that Digitek has done some permanent damage. I don't know for sure if it caused my stroke so it is very confusing; but it is too coincidental to not consider, especially because I had blood tests over the past five years to test for digitalis toxicity and everything seemed to be fine.

As well, I had the stroke in March and the last digitalis toxicity test was last November or December. Four months would be enough time to have a higher level of digitalis toxicity and the recall was about that time. I was in hospital until the beginning of April so it is likely that I had the double-dose Digitek.

More DIGITEK News
I contacted a lawyer and signed a retainer and sent them a form saying they could collect my medical records. I am hopeful that they can recover any medical expenses on my behalf because I don't know how I will ever pay back the hospital—I am living on social security benefits and that sure doesn't cover everything. I went back to work part-time and even now I get really tired. But what can I do? My social security and part time work is barely enough to live on.

You don't realize how dangerous a drug like Digitek is until it happens to you."

Thousands of people may have taken double strength Digitek tablets that led to digitalis toxicity. People like Janice may have taken double the approved level some time before the recall in April of 2008. As a result, Digitek tablets, sold under the "Bertek" and "UDL" labels, became the subject of a Class I nationwide recall—and the third recall by Actavis Totowa, the manufacturer.