For at least 2 years Shyanne's Grandmother, Romsao, had been taking the Digitek heart drug, in the belief that it would protect her against future heart attacks. She died while taking the drug, just 5 days before the drug maker, Actavis Totowa, issued a Class I Digitek recall. 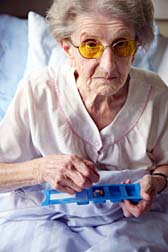 "I started taking care of my Grandma in 2006," Shyanne said. "She had had a pacemaker put in and she was doing really well as a result of it. She was also put on Digitek in 2006. Shortly after starting it we noticed that she was becoming weak, having breathing problems and shortness of breath. I didn't know what was going on so when I went to visit her I would call the paramedics. They would take her to emergency, and she would stay overnight for observation. But nobody ever told me what was going on with her."

Romsao was in and out of hospital 7 times in 2007 – and at no point was the family provided with an explanation as to what was causing her medical problems. Around the end of 2007 Romsao's health became worse. "She didn't seem herself, she would complain of nausea, and began to suffer incontinence," Romsao said. "She also started swelling--retaining fluid, so they gave her diuretics. Then she was hospitalized again. Her heart was getting weaker and weaker. She also lost her appetite, and my grandma used to eat a lot.

In February, 2008, just before I went on a trip, I filled her prescription for Digitek. Then on April 17 or 18, my mother called me and said that Grandma was getting even weaker and that we needed to get her to the hospital. So I came over and we prepared to take her to the hospital. My brother-in-law carried her downstairs to the car. But when we put her in the backseat we noticed that her breathing had become shallow and rapid. I called the emergency services, and they arrived about a minute later.

They took her from the car and put her on the ground, and told us she had had a heart attack. They asked us if we wanted them to resuscitate her, which means she had already died. They did resuscitate her and took her to the hospital and intubated her. All this time she was aware of what was going on. A few days later we got a call from the hospital saying there was nothing more they could do for her, and that we should gather the family and come in. My Grandma died on April 20th 2008." Actavis Totowa issued its Digitek recall on April 25. 2008.

"I didn't know anything about the Digitek recall until about 2 months ago," Shyanne said. "I was watching TV and I saw an ad for Digitek, and realized that's what my grandma was taking. So I did some research--I went online."

More DIGITEK News
Actavis Totowa issued a nationwide recall of Digitek (digoxin tablets, USP, all strengths) for oral use because some tablets were double their normal strength, a manufacturing error, and a potentially life-threatening one. Information was updated May 9th with an FAQ released by the company, but there was little new information beyond a listing of symptoms and side effects related to the consumption of double-strength digoxin tablets.

"You would think that the FDA would let consumers know that Digitek could cause death," Shyanne said. "I feel really badly, because I kept telling my grandma to take her heart medicine because it would help her. I feel like I was giving her medicine that hurt her." Now Shyanne is getting her Grandma's medical records together because she feels certain that Digitek had something to do with Romsao's untimely death.