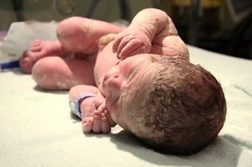 First, a brief history of Depakote (valproate semisodium or divalproex sodium): the drug was originally approved by the FDA for the treatment of epilepsy in 1983 (click here for a brief Depakote timeline up until 2007)…

In the late 1990s, Abbott's warning was bumped up to a black box warning. Even then, it said that—although not proven—instance rates of spina bifida could be 1–2 percent and there was no mention of other birth defects within the first trimester.

In 2009, the FDA issued another warning, stating that drugs containing valproate are linked to a higher risk of neural tube defects and other major birth defects when taken during pregnancy. Research indicated that the biggest risk for birth defects occurs in the first trimester, and often before a woman even knows she is pregnant. "It is an important statistic to note that 55 percent of women do not know they are pregnant until the end of their first trimester," says Hollis. "Depakote is very teratogenic [meaning the ability to cause birth defects]."


In 2011, the FDA required makers of Depakote to add a new warning to its label, this time indicating the increased risk of lowered scoring on IQ and other cognitive tests for children exposed to Depakote in utero.

Attorney Andy Hollis says that the FDA first knew of Depakote birth defects in the early 1980s and the agency requested that Abbott Laboratories, the manufacturer, establish a "Pregnancy Registry" that would more clearly show instance rates of birth defects.

"Time went on and Abbott never did establish a registry," says Hollis. "In 1995, however, a number of drugmakers—including Abbott—initiated a registry in Boston with Dr. Holmes at the helm.

"By September 2002, Boston's findings showed that instance rates were much higher: 8–9 percent of women who were taking Depakote would have a deformed child in various ways, including brain damage and limb deformities.

"Keep in mind that Abbott was a member of this group and therefore knew of the Holmes study—not 1–2 percent as previously reported. Still, Abbott did not see fit to warn or change their warning to reflect these instance rates. As well, prior to publication of the Holmes study, numerous articles that had been peer-reviewed in various publications worldwide were reporting birth abnormalities up to 20 percent.

"Another drug with similar birth defect rates was Accutane. Women who take this drug must go through various steps to ensure they are not pregnant before being prescribed. But Abbott has never in its warning recommended that women take a pregnancy test before being administered Depakote.

"However, when Abbott did their clinical trials for Depakote, they would not let any women of child-bearing age take it without a pregnancy test. The studies on Depakote have continued to affirm a very high instance rate of women that take Depakote of having children with abnormalities.

"Another important thing to know is that a lot of these studies are only studying people who are taking Depakote for epileptic problems; very few studies include women for migraine or bipolar. When the FDA approved it to be used for migraine, an FDA official said in a memo that, although the dangers of Depakote far outweigh a woman's risk for migraine, it was the FDA's opinion that to point this out would be too maternalistic—it would be like a parent admonishing their child. In other words, it was neither the FDA's role nor Abbott's role to step into the parental role and tell women of the dangers—that their child could be born with serious birth defects.

"And here's another thing: When Abbott became aware of this high instance rate of abnormalities, they never communicated this information to doctors or anyone prescribing Depakote until they actually had to change their warning in 2006 to reflect the study by Holmes. And still stating there was no cause and affect…

More DEPAKOTE BIRTH DEFECT News
"Although Abbott's warning states that a child born to a mother who took Depakote has a 1–2 percent chance of getting spina bifida, they still do not have a warning about pregnancy or the hazards of taking the drug if you are of child-bearing age.

"Abbott does have a warning that you should have a liver blood test to determine if the drug can cause adverse effects. Why didn't they include a blood pregnancy test? Further, Abbott does have in the warning that if you do determine that you are pregnant and are taking Depakote to immediately contact your doctor and have a test done to determine if the baby is malformed. To me, that statement infers that you might want to consider an abortion because you have a malformed baby."

There is ongoing litigation regarding Depakote claims, and women who have experienced the birth of children with abnormalities and took Depakote during pregnancy should definitely seek expert opinion as to whether they have a claim.