Accutane: Slipping Through the Cracks Everywhere

All things considered, we would be better off without Accutane. Since its introduction in 1982, the "last resort" acne medication from Roche Pharmaceuticals has been linked to terrible birth defects including hydrocephaly (excess fluid around the brain), microcephaly (unnaturally small head size), heart defects, cleft lip, missing ears, and mental retardation. There is strong evidence linking Accutane to severe depression, sometimes to the point of suicide. 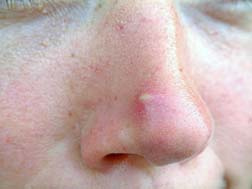 Accutane is most notorious as a known teratogen—that is, a cause of birth defects. Lynn Martinez, coordinator of the Pregnancy Riskline in Salt Lake City, Utah, for the state's health department, says that a pregnant woman taking Accutane runs a 30 to 35 percent risk of birth defects. She says that "Accutane's risk is much higher than thalidomide's—which carries a 20 percent risk—and its harm to the child is far worse."

Worse than thalidomide, and yet still on the market. In fact, the federal Food and Drug Administration (FDA) tried to recall Accutane from the market in the 1990s in the wake of publicity following the suicide of Congressman Bert Stupak's teenage son, who had been taking Accutane treatments.

In the face of powerful lobbying by pharmaceutical and dermatologists' organizations, however, the FDA had to settle for stronger product labelling and a new compulsory program called iPledge, designed to prevent women of childbearing age from becoming pregnant while on Accutane.

It was a simple tradeoff; Roche knew that it had to reduce or eliminate birth defects linked to Accutane in order to keep it on the market. So Roche dodged a recall and kept selling Accutane.

IPledge, meanwhile, began in 2006, and has been less than a stellar success. Despite its regimen of strict birth control, detailed warnings, and compulsory blood and pregnancy tests, almost 160 pregnancies occurred among women enrolled in iPledge in its first year. Another 19 occurred among women who never registered—but who got Accutane anyway.

How do you get Accutane without enrolling in iPledge? Well, the FDA has a much-trumpeted Web page that warns against purchasing Accutane through Internet pharmacies that it says will appear whenever someone queries a search engine for the drug.

Does it work? Try Googling "Accutane". You'll find a lot of online pharmacies peddling Accutane without a prescription as you go from page to page. You may never find the FDA warning page. It's easier to find grey-market Internet Accutane than the federal government's warning against it.

More News
And even if someone has a doctor's prescription for Accutane, is it really necessary? Accutane was developed for treating the most severe, disfiguring forms of nodular acne that did not respond to other therapies—it's called a "last resort" for good reason. This form of acne may affect as few as 6,000 women of childbearing age in the US, and yet upwards of 100,000 Accutane prescriptions are filled by women each month. Discretionary "off-label" prescribing may be the biggest crack that Accutane slips through. Martinez comments, "It's an amazing drug approved for severe nodular or cystic acne, but it's estimated that in the US, 90 percent of prescriptions are off label. Someone gets an outbreak of pimples and wants Accutane." And some people—or, worse, their children—pay the price for Roche's profits.