Were you looking for Acetaminophen or Benadryl, Tylenol, Motrin Recall Expanded or Popular Children's and Infant's Medications Recalled or Tylenol lawsuits?

Tylenol is one of the most popular painkillers in the world, yet it has been linked to a number of serious Tylenol side effects. Attorneys are investigating Tylenol overdose and Tylenol liver damage claims stemming from acetaminophen toxicity, and are subsequently filing Tylenol lawsuits.

Send your Tylenol/Acetaminophen claim to a lawyer who will review your claim at NO COST or obligation.
GET LEGAL HELP NOW 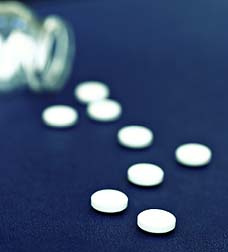 As well, consumers tend to think that over-the-counter medications (OTC) such as Tylenol--particularly Children's Tylenol products--are safe. They may ignore label warnings and take too large of a dosage or take dosages too often. Or they may take multiple medications with acetaminophen as the active ingredient, which can cause acetaminophen toxicity, leading to serious Tylenol side effects, namely Tylenol liver damage.

Tylenol overdose may overwhelm the liver's defenses and cause liver damage or even liver failure. Liver failure can be fatal; the only known cure for acute liver failure is a liver transplant.

1997: McNeil Consumer Products Company adds new labeling to its infant Tylenol, warning that the contents are concentrated acetaminophen and that taking more than the recommended dose could cause serious health risks.

2008: J&J allegedly hires contractors to secretly recall a Tylenol product in order to remove it from store shelves. (lawsuit below)

June 2009: September 2009: McNeil Consumer Healthcare (Johnson & Johnson) voluntary recalls Children and Infant Liquid Tylenol Products that were manufactured between April of 2008 and June of 2008. The products may potentially be contaminated with harmful bacteria. (J&J later announces that B. cepacia bacteria is discovered in some of the unused raw material for these products.)

Small doses of Tylenol's active ingredient, acetaminophen, have been associated with liver damage and even deaths in children in the US. Acetaminophen dosage errors led to 14 deaths and 74 injuries from 2000 to 2010 in children under the age of 13, according to the FDA.

While Tylenol has been on the market for 50 years, many professionals feel that the proper dosage of acetaminophen for children is still unknown and more testing and education is necessary to prevent liver damage and accidental deaths. Many people are confused by packaging directions for Children's Tylenol as they are given by age and weight. And other medications such as cold and sinus medications, which contain acetaminophen, can add to the risk of Tylenol overdose.

McNeil's Children's and Infants;Tylenol Melt aways and Soft Chews have been associated with acetaminophen overdose problems. Labeling is confusing: The design of the Melt away and Soft Chew packages include some blister voids that contain one tablet while some others contain two per void. Consumers may believe that two tablets provide a total of only 80mg when two tablets are really a total of 160mg which, when consumed by a child, can lead to Tylenol over-dosing.

In September 2009 McNeil Consumer Healthcare recalled the following products after a certain type of bacteria was discovered: If your child has developed a serious medical injury from taking one of these defective Tylenol products, you may be eligible to receive compensation for your damages.

Asthma is the leading cause of chronic illness in children. It affects about 10 to 12 percent of children in the US and it is steadily increasing. Asthma can begin at any age (even in the very elderly), but most children have their first symptoms by age 5.

The exact reasons why more and more children are developing asthma are still unknown. Some experts suggest that children spend too much time indoors and are exposed to more dust, air pollution, and secondhand smoke. Some suspect that children are not exposed to enough childhood illnesses to direct the attention of their immune system to bacteria and viruses. Now, research indicates that Tylenol may be linked with an increased risk of asthma in children and adults.

Researchers found that acetaminophen users were 63 percent more likely to have asthma than nonusers. They also found the following:

If you or a loved one has suffered from liver failure or overdose from using Tylenol or other drugs containing acetaminophen, you may qualify for damages or remedies that may be awarded in a possible class action lawsuit. Please click the link below to submit your complaint and we will have a lawyer review your Tylenol complaint.
Please click here for a free evaluation of your Tylenol/Acetaminophen claim
Last updated on Jun-17-14

Tylenol patients who sue Tylenol manufacturer McNeil Consumer Healthcare and its parent, Johnson & Johnson (J&J), for adverse reactions such as alleged liver damage aren't the only litigants launching a Tylenol lawsuit: investors also have their legal beefs with J&J with regard to the company's corporate oversight of good manufacturing practices (GMP) and marketing efforts.READ MORE
Woman in Tylenol Coma for Six Weeks

A few years ago Shari took the recommended dosage of Tylenol for a bad headache: six “rapid release” tabs over a period of 24 hours. “By 10pm I felt like I was going to pass out so I called 911,” Shari says. She was taken to the local hospital and can’t remember anything, until she woke up in the St. Louis University hospital. Her diagnosis was Tylenol liver damage. Shari was close to death.READ MORE
Tylenol and Acetaminophen Toxicity a Growing Problem

The trouble with heritage medications is, like comfort food or a favorite sweater, they can lull you into a false sense of comfort and security. And who would have thought that when acetaminophen was first approved by the US Food and Drug Administration (FDA) way back in 1951, we would one day be talking about Tylenol liver damage and other adverse reactions related to the popular over-the-counter (OTC) medication.READ MORE

Posted by
Sandie
on November 3, 2017
For years, I have experienced what I call " Pain from HELL! " in the upper right side of my abdomen! Had multiple sonograms along the way, to find out why I was having such ACUTE PAIN, only to no avail! Finally in 2013 I was diagnosed with Stage 1 or higher, renal failure, after having to be rushed to the hospital for an very painful kidney infection! Once there, tests were performed as well as blood work, and a CT Scan was also ordered by the doctors there. I had no idea that years of taking Tylenol on a daily basis! I thought Tylenol only caused liver damage! I had no idea that Tylenol can also damage your kidneys!! Seems to me that everything you buy over the counter for pain nowadays, contains Acetaminophen. And if it isn't Acetaminophen, its Ibuprophen causing damage to your liver & kidneys!
Posted by
Anonymous
on September 3, 2014
My Identical Twin of 40 years passed away from Tylenol poisoning. I haven't been the same since. I'm glad to finally see action taken on this deadly stuff-acetaminophen. Most don't know that this chemical is also found in antifreeze.

Posted by
Anonymous
on July 17, 2014
I took Tylenol for years a few a day and over a period of time I went into a delirious state of mind and passed out if it wasn't for my husband I would be dead. My husband found me unconscious. I was in a coma for a month in an half my lifer spout down and my kidney. I have acute liver failure and Tylenol toxicity. Please stop prescribing Tylenol.
Posted by
Anonymous
on April 30, 2014
Had extreme back pain before and after surgery. Took 2-4 Tylenol extra strength every day for 20 years. Also mixed it with 4-6 alcoholic drinks per day. Liver cirrhosis was diagnosed in 2005 and eventually had a liver transplant to save my life in 2006. On immune-suppressant drugs since and developed lymphoma in April of 2013 and am undergoing chemotherapy since then which for now has put the cancer in remission. Cancer was no doubt caused by anti-rejection drugs necessary to prevent liver failure.
Posted by
Texas
on July 2, 2012
I was rushed to the hospital on December 23, 2011 after passing out in the mall. they kept me at the hospital from dec 23 til dec 28th and concluded I had liver damage. I had severe Abdominal pain, sweating, loss Consciousness, nausea.
Posted by
Missouri
on April 1, 2012
I have been bloated to an excess of about 20 lbs, very tired, weak, very delirious non-existing and irregular menstrual cycles and had to live in the hospital before i was transplanted.
Posted by
Oregon
on January 11, 2012
Declared terminally ill because of liver failure due to alcohol/tylenol use. Doctors continued its use even after its known side effects.
Posted by
British Columbia
on December 7, 2011
I collapsed in a coma with liver failure, and received an emergency liver transplant. I lost the sight in one eye as a result of brain swelling during the coma, and have mild brain damage, with the result that I can not work, drive, or read sustained text.
Posted by
Arizona
on October 27, 2011
After years of internal bleeding, I was diagnosed at the Mayo Clinic with Liver Disease last December, 2010. They said I had it for years, yet constant doctor's appointments and bloodwork never detected this. I am 64 and work full time, but this disease is difficult to deal with and I am absent a lot (unpaid).
Posted by
Missouri
on October 26, 2011
I have had 3 biopsies confirming liver diease, I am pending my last test of end stage liver disease. I use to take Tylenol frequently. I dont have the typical symptoms of a person with NASH/NAFLD, I dont have diabetes, high cholestrol, etc. I really think Tylenol did this to me.
Posted by
California
on April 14, 2011
My kidneys and liver shut down, the next morning I was rushed to the hospital. The Drs didnt know what was wrong, only that my system shut down. I had to convince them that the only meds I took was the Acetaminophen the Dentist prescribed.
Posted by
New Jersey
on March 18, 2011
Acute liver failure, renal shutdown, brain swelleing from water retention. I was given a 5% chance to live at first, and found out after from the doctors that caffeine magnifies the effect acetaminophen risks for liver damage
Posted by
Texas
on February 6, 2011
I have always been in good health. In 2005 I tried to buy additional life insurance through work which prompted an extensive medical exam. The only indication that something was wrong was when I was denied the additional life insurance. Subsequent tests showed a negative progression eventually leading to being told to stop using Tylenol completely.