A few years ago Shari took the recommended dosage of Tylenol for a bad headache: six “rapid release” tabs over a period of 24 hours. “By 10pm I felt like I was going to pass out so I called 911,” Shari says. She was taken to the local hospital and can’t remember anything, until she woke up in the St. Louis University hospital. Her diagnosis was Tylenol liver damage. Shari was close to death. 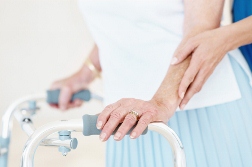 “When my kidneys and liver shut down, they put me in an induced coma and I was on life support for six weeks,” says Shari. She never had any kidney or liver problems and only took Tylenol for the occasional headache. “I was 55 years old and worked out daily—the doctors said my good health saved me.

"They didn’t ask many questions when I woke up, but I remember them asking if I knew where I was—No. Then they asked if I knew my name--Yes. When I was finally moved out of intensive care they told me that I had Tylenol toxicity. They explained what I had been through—I couldn’t believe it, I was speechless! It was like waking up on another planet.

"Slowly, they started building up my health; psychiatrists constantly came by and asked how I was. ‘I don’t know, you tell me?’ I replied. I lost some of my memory—to this day I can’t remember some things we did when my kids were young. I can look at photos and talk about them, but the basic memory is not in my brain. I can’t call up a memory without association. And I lost my older memory because I can’t remember my childhood—it isn’t because of old age.”

When Shari was released from hospital, she could barely walk. She moved into her sister’s house—she was carried in—and had to use a walker. A family member had to get her in and out of the bathtub and needless to say, she couldn’t return to work. “Thank god I have family, otherwise I would be living on the street,” Shari says. While Shari was in a coma, her son sold her house. She says they had an option: to keep her on life support or pull the plug.

Tylenol has basically turned Shari’s life upside down. When she was well enough, Shari applied for SSI and Medicaid, but it didn’t even scrape the $800,000 hospital bill. She was denied disability insurance—social security concluded that she could get a job in a different line of work. “I am 55 and supposed to start a new career after being in this job for 25 years,” she says.

“Fortunately my sister did everything for me. A therapist came by for a few months and I got added health care. I tried to find a job but someone got me financial aid to go back to school. It took me a year to get my strength back to walk without the walker. Then I started walking up the stairs, three times a day.
Now I am taking a business course online and planning on getting a degree in business administration. I have to stay optimistic, I am not just going to sit here and feel sorry for myself.

More TYLENOL/ACETAMINOPHEN News
"A lot of people are taking Tylenol and don’t have a clue that Tylenol side effects could be this severe. Right after this happened they pulled Tylenol off the shelves and liver and kidney damage was listed as side effects. What a coincidence. When I took it, there wasn’t mention on the label of kidney or liver damage. They can change the label after the fact but they can’t change time.”

Two months after Shari was rushed to hospital and put into a coma, an FDA advisory panel voted to recommend lowering the maximum daily dosage of acetaminophen – the active ingredient in Tylenol and other popular painkillers – in over-the-counter (OTC) products to reduce the risk of unintentional overdose. Too much acetaminophen is considered a leading cause of liver failure. The panel voted to strengthen and clarify labeling and to limit the maximum single dose of nonprescription acetaminophen to 650 milligrams (mg) from 1,000 mg. That vote came too late for Shari.