Salmonella Found In Red Tomatoes, or is it Peppers?

As of July-09-08, the salmonella outbreak has sickened more than 1,000 people, and health officials now suspect jalapeno peppers are the culprit. Originally suspect were certain types of raw red tomatoes and products containing raw red tomatoes, but peppers and cilantro are now considered as suspect as well.

Send your claim to a lawyer who will review your claim at NO COST or obligation.
GET LEGAL HELP NOW 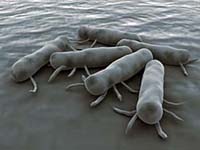 From April 23 though July 9, 2008, there have been 1,017 reported cases of salmonellosis caused by Salmonella Saintpaul. Approximately 30 reports of illness in Arizona, Colorado, Idaho, Illinois, Indiana, Kansas, and Utah are currently being investigated to determine whether they are also linked to tomatoes, jalapeno peppers or cilantro. There are no reported deaths.

The specific type and source of tomatoes, peppers and cilantro are under investigation. However, preliminary data suggest that raw red plum, red Roma, or round red tomatoes are the cause. At this time, consumers in New Mexico and Texas should limit their tomato consumption to tomatoes that have not been implicated in the outbreak. These include cherry tomatoes, grape tomatoes, tomatoes sold with the vine still attached, and tomatoes grown at home.

If you or a loved one has suffered illness, or hospitalization as a result of consuming salmonella tainted jalapeno peppers, please click the link below to send your complaint to a lawyer who will evaluate your claim at no cost or obligation.
Please click here for a free evaluation of your claim
Last updated on Sep-30-08

Marie believes she suffered from salmonella food poisoning after eating both salmonella peppers and tomatoes. "Due to the fact that I'm a nurse I didn't go to a doctor," she says, "but what really troubles me is that my grandson frequents fast-food restaurants and they continually served tomatoes and peppers on almost everything."READ MORE
Tomato-Pepper Salmonella: Frustration led to Lawsuit

Cheryl Grubbs contacted Marler Clark LLP before she knew that jalapeno peppers likely caused the Tomato/Pepper Salmonella outbreak. " I wanted to know who was supposed to report this, who was responsible, says Grubbs. "What is the protocol-- was I just supposed to phone the local newspaper and tell them my husband had salmonella? "READ MORE
Tomato-Pepper Salmonella: Why the Grubbs are Suing Wal-Mart

"Truckloads of contaminated jalapenos were turned back at the border before we bought them at Wal-Mart," says Cheryl Grubbs, "so why did Wal-Mart still have them in their store?" Her husband, Brian Grubbs, almost died from the tomato/pepper salmonella outbreak, and Cheryl is furious because his illness could have been avoided.READ MORE