Cheryl Grubbs contacted Marler Clark LLP before she knew that jalapeno peppers likely caused the Tomato/Pepper Salmonella outbreak. " I wanted to know who was supposed to report this, who was responsible, says Grubbs. "What is the protocol-- was I just supposed to phone the local newspaper and tell them my husband had salmonella? " 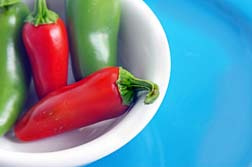 Cheryl's husband Brian almost died from Salmonella st paul and she was frustrated; Cheryl believed it was her civic duty to warn her community but nobody gave her direction. "Was I supposed to supply the media with documentation, was I even supposed to talk to them?" she asks. "I guess anyone could call a reporter and say, 'Hey I got salmonella poisoning at Denny's, or even some restaurant they have a gripe about. And at this time we'd heard that salmonella poisoning had only come from restaurants, not from buying tomatoes or peppers at the local grocery store or in our case, jalapenos from Wal-Mart.

"And the amount of time it took was frustrating. The hospital where Brian was admitted had sent his medical records to Denver and the reason everything was taking so long was because originally they had gone to Santa Fe. If you don't know this area, I should explain: We are in the 'Four Corners' area—which means the four states come together. That can add to confusion but being local, you kind of know that. However, if there is a nationwide outbreak of salmonella, it shouldn't be state to state, it should be mile-to-mile. For example, an outbreak in New Mexico could mean next door for us: in other words, salmonella has no borders.

If we had an outbreak in Farmington, New Mexico, that would be more alarming than having it in Denver, Colorado. The hospital we went to was Shiprock, which is on Native American land (my husband is Cherokkee), and that caused further confusion—even though the hospital knows we live in Dolores, Colorado, they still sent his records to Santa Fe.

And all this time we were still thinking that tomatoes caused the outbreak—Brian had eaten a tomato sandwich a few days prior to getting sick. When I called Denver to find out the test results, they said it was positive for salmonella. 'We will send you a copy of the report when we get a notarized letter, signed by your husband,' the administrator said. More time, and nobody seemed to be doing anything. That is when I called attorney Bill Marler and he got involved right away. Marler didn't know what kind of salmonella Brian was suffering from but I assured him that I would send him the report asap.

More TOMATO/PEPPER SALMONELLA News
Right away, his law firm sent me a package—a contract allowing them to represent us. At that point we didn't know that there would be a class action lawsuit. All we knew a few days later was that we had the report confirming salmonella st paul and Brian's stool sample matched the jalapeno pepper sample.

I called Marler as soon as I had the report and he said we probably have a case. Marler wanted to know where I bought the peppers and did I have a receipt. Yes, I still had the receipt from Wal-Mart. Next, the law firm got a Colorado attorney involved and that's where it stands now.

It never crossed my mind that we would get involved in a lawsuit; at the time I was caught up in my husband's welfare and the lack of community awareness; I felt it was my duty to not only protect my family, but also to protect this small community. At the same time, I believe that Wal-Mart was negligent; they sold jalapeno peppers after the warning of a potential link to the outbreak."