Marie believes she suffered from salmonella food poisoning after eating both salmonella peppers and tomatoes. "Due to the fact that I'm a nurse I didn't go to a doctor," she says, "but what really troubles me is that my grandson frequents fast-food restaurants and they continually served tomatoes and peppers on almost everything."

Marie didn't know at first why her teenage grandson and his friends were coming home with diarrhea, stomach aches and low-grade fevers until she saw a news bulletin about the salmonella outbreak. "Fast food restaurants were putting tomatoes and peppers on almost everything," says Maria. "We eat a lot of Mexican food—including salsa that contains raw tomatoes and peppers—and even hamburger drive-ins serve tomatoes and lettuce and peppers on the side without the consumer requesting them." 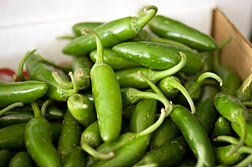 At first, certain varieties of tomatoes were thought to be the cause of the salmonella outbreak. To this day, investigators say tomatoes may have been contaminated, but jalapeno peppers have been confirmed to contain the same genetic fingerprint as salmonella st paul.

Marie asks a valid question: How is a consumer to know which tomatoes are safe and which ones are on the 'no-eat' list when they have been sliced and diced? "Just yesterday I sent my grandson to Imperial Burgers; I ordered a plain cheeseburger with dressing only," she says. "Instead I got a cheeseburger with lettuce and tomato and peppers on the side.

"This is really annoying. What can we do about this besides call the health department? They have probably been inundated with calls from people getting ill, but people don't know where they are getting ill from. Taco Bell is another culprit: Lots of eateries have islands in the middle of their dining area where you can load up on condiments, including peppers and tomatoes.

More TOMATO/PEPPER SALMONELLA News
After a tomato is sliced how do you know where it comes from? Nobody knows if it is from Mexico or the US and the teenagers are getting sick--teenagers go out together and eat a lot.. My grandson recently told me that several of his classmates became ill with salmonella food poisoning symptoms and nobody knows why they are getting sick. They aren't going to the doctor for a low-grade temperature and vomiting and it isn't flu season. I just stopped him from eating those items, period: No tomatoes, peppers or lettuce. We are getting so many fruits and vegetables from out of the country, it is a growing concern."

Meanwhile, the produce industry says the search for the source by the FDA, which started with tomatoes and ended with jalapeno and serrano peppers, shattered consumer confidence and cost it millions. Officials said the number of cases from the nation's largest epidemic of food-borne illness had "slid to non-outbreak levels in early August and there had been no clusters of victims since early July." However, like Marie's grandson and his friends who didn't go to a doctor, the number of salmonella cases reported may have been the tip of the iceberg.