Tomato-Pepper Salmonella Outbreak: It Ain't over till it's Over

Although government agencies have said that the tomato-pepper Salmonella outbreak "appears to be over," food poisoning attorney Bill Marler has months of litigation ahead. "For those cases where we definitively know where the product came from, lawsuits have been filed or we are in the process of filing," he says. 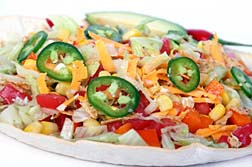 For other complainants that don't know what made them sick (tomatoes, peppers or even salsa) or where they purchased contaminated food, Marler says the situation is more problematic, i.e., trying to figure out how to get victims compensated. "Not to sound trite but you must have someone responsible, someone to sue," he says.

"For example, there are a lot of cases where people ate out multiple times and ate dishes with tomatoes and peppers," explains Marler, " and within that time frame of getting sick, if they ate on Monday and again Tuesday at different Mexican restaurants, how will you know which one had contaminated food?" Marler's firm is investigating all of those possibilities.

"Even today I am not convinced it was solely peppers responsible for the outbreak," he adds. "I think tomatoes were involved early on in the outbreak. Investigators have been able to locate a certain water source at a certain supplier in Mexico and that supplier provided both peppers and tomatoes, so the water source was contaminated with salmonella. In other words, Salmonella did not necessarily come from the grower. Then they found contaminated peppers at a warehouse in Texas.

"We are currently trying to trace where people got sick; we are tracing back upstream, where they got the tomatoes and/or the peppers that made them sick. And it is going to take time to figure it all out."

Marler sued Wal-Mart on behalf of his client, Brian Grubbs who purchased jalapeno peppers from the retail giant. As well, his stool sample and the peppers had the same DNA fingerprint and tested positive for Salmonella. "In the case where we sued Wal-mart, we have the ability to do discovery with their shipping records and hopefully that process will help us figure out for other victims the common denominator—supplier, grower, trucking company," says Marler.

It sounds like hunting for a needle in a haystack or a bacterium in a stream...

More TOMATO/PEPPER SALMONELLA News
Marler says his firm is doing exactly what the CDC and the FDA are doing. "We are also issuing subpoenas and The Freedom of Information Act requests to both agencies asking for all of their investigation documents—and that we should get them sooner rather than later," he says.

"I have been successful in the past gathering this information," adds Marler. "You just have to be diligent and patient. And our clients understand this process; they want to make sure we are suing the right guy--so they are also patient."

Marler Clark LLP is the nation's foremost law firm with a practice dedicated to representing victims of food poisoning, and Marler has been down this road many times before. "The status on the outbreak is this: the CDC and the FDA are saying 1500 people got sick and we haven't seen any illnesses for the past few weeks so they determined it is over," says Marler. But Marler's work is far from over and he is still receiving complaints.

If you have suffered losses in this case, please send your complaint to a lawyer who will review your possible [Food Poisoning Lawsuit] at no cost or obligation.
Request Legal Help Now