Builders and environmental consultants began investigating Chinese drywall after reports that the potentially toxic drywall caused unpleasant (rotten egg) odors. According to the Florida Department of Health and US Consumer Product Safety Commission, as of July 30, 2009, twenty-three states have reported 681 cases of health problems and/or metal corrosion associated with Chinese Drywall. Those states hardest hit are Florida, Louisiana, Alabama, Georgia and Virginia, but complaints from Arizona and California are also increasing.

Send your Chinese Drywall Problem claim to a lawyer who will review your claim at NO COST or obligation.
GET LEGAL HELP NOW

The Homeowners Consumer Center in Washington, D.C says Chinese drywall has allegedly been used in residential construction in all 50 states, but mainly in Florida, Louisiana and Virginia, between 200,000 and 300,000 residences could be impacted nationwide. 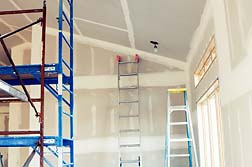 Anyone who owns a house built between 2002 and 2007 could have a problem with contaminated drywall. Americas Watchdog Consumer center officials believe the toxic drywall entered the country at the ports of Long Beach, Oakland and Seattle/Tacoma starting in 2001 and that homebuilders and contractors began using it a year or so later.

Consumers who bought homes during the housing boom are also worried that Chinese drywall problems can lead to electrical problems, thus making it difficult to sell their homes. Drywall, also known as wallboard or plasterboard, is typically made from the mineral gypsum in the US, but a shortage led suppliers to import drywall from gypsum mines in China.

Homeowners are concerned over the potential for property damage and health problems resulting from drywall from China that reportedly leaks corrosive chemicals. Reports include copper tubing turning black, the failure of air conditioning coils exposed to the drywall, smells of sulfur and illness (possibly from breathing airborne sulfuric compounds), including respiratory problems, nosebleeds and headaches.

Currently, The Centers for Disease Control and Prevention (CDC) is working with the Consumer Product Safety Commission (CPSC), the Agency for Toxic Substances and Disease Registry (ATSDR), the U.S. Environmental Protection Agency (USEPA), and state health departments to learn about possible health problems from living in a home with imported drywall and how to advise the public to protect their health. Furthermore, CDC is working with federal agencies responsible for indoor and outdoor air testing to ensure that the results can help answer health questions.

One home inspector suggests that no home should be sold in the state of Florida (the epicenter of Chinese drywall complaints) that was built after 2000 without being tested for contaminated drywall. According to Florida's Intuitive Environmental Solutions, an environmental consulting and inspection firm specializing in indoor air quality and mold contamination issues, the gypsum material used in some of the imported drywall was initially used as filter media in the smokestacks of coal-fired power plants to reduce air pollution. The gypsum material was used to remove contaminants from the high-sulfur-content coal.

The firm suspects that some of the drywall imported from China in 2004 and 2005 to states such as Florida, Louisiana and Virginia was made with waste products taken from scrubbers on coal-fired power plants. Those materials can subsequently off-gas into the atmosphere, and when those gases combine with moisture on air conditioning coils they create sulfuric acid. This in turn, appears to be dissolving solder joints and copper tubing, creating leaks, blackening the coils and causing air conditioning systems to fail. In addition, copper wiring, piping and copper associated with refrigerators inside some homes are corroding along with mirrors, jewelry, faucets and drains. Some homeowners have reported fixtures—such as towel racks—falling off their walls.

As of March 10, 2009 six class-action lawsuits had been filed in Florida on behalf of more than 2,000 homeowners in that state who claim their homes are eroding because of contaminated drywall. Miami-based Lennar Corp., one of the largest homebuilders in the United States and California, has been named as a defendant. Lennar Corp. has subsequently filed suit against numerous U.S. drywall manufacturers, which reportedly ordered drywall made in China and then shipped it into the US.

The lawsuits allege sulfur compound levels in the drywall are too high, causing issues with air conditioning systems, electrical appliances, internal wiring and other electrical systems in homes. Plaintiffs also claim the contaminated drywall produces a rotten egg-like stench and causes a variety of respiratory and other health problems for those who live in the affected homes. The lawsuits filed so far have named Chinese-based manufacturers, as well as importers, developers and builders, contractors, suppliers and others. Companies facing suits include Knauf Gips KG, Knauf Plasterboard Tianjin Co., Taishan Gypsum Co., L&W Supply Corp. and USG Corp. Lennar Corp., a major home builder, has brought in more than 20 manufacturers, suppliers and installers.

Lawsuits in other states, including California, are currently pending.

If you or a loved one has suffered damages in this case, please click the link below and your complaint will be sent to a lawyer who may evaluate your claim at no cost or obligation.
Please click here for a free evaluation of your Chinese Drywall Problem claim
Last updated on Mar-9-19

Her name is Eleanor Aguilar and Chinese drywall chased her out of her own home. Her townhouse in Lauderhill, Florida, was built with defective China drywall from Knauf Plasterboard Tianjin. The defective drywall compromised her health as well as her appliances—and now her home will take three months to remediate.READ MORE
CDC: No Link between Chinese Drywall and 11 US Deaths

The Centers for Disease Control and Prevention recently said that it did not find a link between Chinese drywall and the deaths of 11 people across the country living with the defective product, The Associated Press reports.READ MORE

Posted by
Nevada
on July 20, 2011
Have not been able to sell this investment property due to hazardous materials.
Posted by
New York
on September 1, 2010
My 79 year old aunt, and my 78 year old grandmother are battling cancer and many other health issues. They lost everything including brand new furniture, all personal possessions due to Hurricane Wilma. Now lost everything again after replacing it due to Chinese drywall. The contractors who installed the Chinese drywall are no longer in business. Somebody has to be responsible for my sick aunt and grandma being homeless. Please help.
Posted by
Florida
on September 14, 2009
My A/C units have required repairs for freon leaks since shortly after installation in late 2008. This past Friday, September 11, 2009, my A/C company owner came out and informed me that I had Chinese drywall and all my A/C evaporator coils were corroded and black and my wiring was also turning black. The warranty on fixing them will now be voided and anymore repairs will cost a minimum of $500.00 per coil to replace only to have them continue to be damaged by the sulfur from the sheetrock. He took photos and will provide them to me. He said he could hardly stand the sulfur smell when he walked into the house. My new digital TV has developed fine lines across the screen. My smoke detectors have gone off in the night for no apparent reason. One at a time, all of the batteries have had to be replaced since December 2008. The copper pipes under my sink are turning black, etc. My kids have suffered with headaches, sore throat, sinus problems, watery eyes, etc. I have suffered the headaches, insomnia, sore throats, sinus problems, watery eyes, dizziness, equilibrium issues with ears, fatigue, etc. My brother who helped with construction of the house and specifically with the hanging of the drywall continues to suffer with tightness across his chest and breathing issues. He breathed this stuff daily for months, cutting it, screwing it to the walls, and taping the seams, and then sanding it. Now we feel we must move out of the house and take what we can salvage of the appliances out before anymore damage is done. Our 5,000 sq. foot home valued at $450,000.00 just devalued to pretty much $0.00. Canï¿½t sell the house without disclosing the problem and no one in their right mind would offer to buy it. Can't afford to remediate and pay for two residences at the same time. We are totally disgusted and depressed over losing our beautiful home and losing over $100,000.00 in cash invested over and above the $225,000.00 loan from the bank.
Posted by
Pennsylvania
on June 28, 2009
My husband and children and myself have been sick since moving into this house.. After having insurance co. come to inspect house and not being able to find the reason, we began to renovate a wall in the kitchen and found the walls all contained formaldehyde manu. by Dom Tar Ind.