Surgical mesh is a medical device designed to provide support for tissue and organs that have been weakened or damaged. Among the main types of surgical mesh that are used in different surgeries is abdominal mesh, which is used to repair the abdomen following a hernia. Surgical mesh lawsuits have been filed alleging the various meshes do not work as they were intended and are linked to serious complications.

Send your Surgical Mesh claim to a lawyer who will review your claim at NO COST or obligation.
GET LEGAL HELP NOW 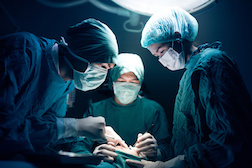 Abdominal surgical mesh is used to help repair issues in the patient's abdomen such as hernias. Mesh is used to reinforce a hernia repair or strengthen abdominal wall tissue. The mesh is made from animal tissue or synthetic materials and can be absorbable, non-absorbable, or a combination of both.

Absorbable mesh, according to the US Food and Drug Administration (FDA) loses strength over time and is not intended as a long-term reinforcement. As the absorbable mesh, which is made from animal tissues, degrades, the patient's new tissue growth should take over and provide strength. Non-absorbable mesh is made from synthetic materials and is considered a permanent implant.

Due to serious complications, some abdominal mesh products are no longer on the market. Complications reportedly associated with recalled meshes:

"In the FDA's analysis of medical adverse event reports to the FDA, recalled mesh products were the main cause of bowel perforation and obstruction complications," FDA notes.

Products that have faced or could face a lawsuit concerning serious complications linked to abdominal surgical mesh:

The Composix Kugel Mesh Patch has been voluntarily recalled multiple times after concerns were raised that a component in the patch could break under stress, possibly causing bowel perforations and/or chronic enteric fistulae. C.R. Bard, parent company of Davol Inc., has faced thousands of lawsuits alleging patients suffered serious medical problems linked to the use of the Composix Kugel Mesh patch.

In 2011, Bard announced it would pay $184 million to settle the majority of lawsuits filed against it. Bard had argued that problems with the memory ring were the fault of doctors implanting it and not an issue with design of the patch.

A Kugel Mesh lawsuit was also filed in Canada, alleging Canadian patients suffered complications as a result of the Composix Kugel Mesh Patch.

Bard also faces allegations linked to its Ventralex hernia mesh. Ventralex, made from polypropylene, was approved by the FDA in 2002. Plaintiffs allege it has an unreasonable risk of complications because it was not properly manufactured or designed.

In 2016, Ethicon issued a voluntary withdrawal of its flexible composite physiomesh, after unpublished data from two registries suggested the product had higher than expected recurrence rates. In announcing its withdrawal, Ethicon noted that the problem could be linked to product characteristics, operative factors, and/or patient factors. Lawsuits have been filed against Ethicon, alleging patients suffered serious health complications due to use of the flexible composite physiomesh. They further allege the composite mesh has a high risk of unreasonable side effects.

Makers of the C-Qur Hernia Mesh face allegations that the mesh is not suitable for its intended purpose. Patients allege the mesh "folded up" and caused pain, infection, and septic shock.


Alloderm is a skin graft used in reconstructive breast surgery and hernia repair. Complications linked to Alloderm include infection, pain, abscesses, and inflammation.

If you or a loved one has suffered Surgical Mesh damages or injuries, please click the link below and your complaint will be sent to a Medical Device lawyer who may evaluate your claim at no cost or obligation.
Please click here for a free evaluation of your Surgical Mesh claim
Last updated on Mar-18-20

Lorna P., one of many hernia mesh victims, is hopeful that she will receive compensation after hearing that the jury in the second C.R. Bard bellwether trial awarded $255,000 to a man allegedly injured by C.R. Bard’s hernia mesh. READ MORE
Covidien Parietex Lawsuit Claims Hernia Mesh Defective and Dangerous

Fifteen hernia mesh victims have filed a motion with the U.S. Judicial Panel on Multidistrict Litigation seeking to consolidate and centralize Atrium’s ProLite and ProLoop mesh claims before one judge in U.S. District Court for the Central District of California. READ MORE

Posted by
Texas Rancher
on July 19, 2022
In 2013 my mom was hospitalized. We suspected a stroke and it turns out that cancer is believed to have caused it plus others. A mass was found and eventually it was surgically removed. I protested upon learning that surgical mesh was to be used. I don’t have the timeline but that mesh proved to be a costly mistake. An infection with mesh occurred and required removal. The result was a surgical wound that didn’t heal well. A pump had to be worn. We were told that due to the surgical wound, neither chemotherapy nor radiation could be used to treat the cancer. Our mom suffered greatly and passed away in 2017.
Posted by
Holiday Sayers
on August 29, 2021
I had seri surgical scaffolding placed in my breasts in late 2015. It caused me to have a mastectomy. It mixed with my tissues. Caused an infection and almost killed me. My breast tissue went necrotic due to the mesh. No one cares because its not hernia mesh.
It was against the FDA to use this mesh as an internal bra and my surgeon Kyle Song in Irvine did it anyways!!!
Posted by
Lomah Sarney
on July 23, 2019
Approximately 8 years ago I had an abdominal hernia repair and mesh was used. Not sure exactly when but it was possibly 2 to 3 years after that I felt little prickles coming through my skin in the form of a square around the site of the scar. These disappeared and I thought this was due to a weight gain.,
Over the last 6 months, I have been complaining of a breathing problem and not feeling 100%.. My left lung has been checked out and it seems this is not the cause of the problem. I have now discovered that there is a feeling down the middle of my abdomen of a long hernia which when I press restricts my breathing.Also on the left side of the indent there seems to be a long cylindrical lump and there is not one on the right side.
I have been referred to the Specialist at the Hospital for an appointment which should be in the next 2 months or so. My question at this moment is "what should I be asking the surgeon / specialist about if it is the mesh that is the problem" Thank you for your patience...