Send your Kugel Mesh Hernia Patch claim to a lawyer who will review your claim at NO COST or obligation.
GET LEGAL HELP NOW

The memory ring is designed to aid in deployment of the patch, but it can break when increased stress is placed on it during certain surgical placement techniques. If the ring should break, the broken ends could poke through the mesh and create bowel perforations and/or a condition called "chronic enteric fistulae." 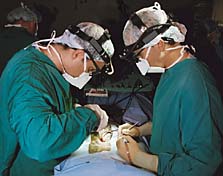 The first Kugel Mesh recall occurred in 2005. It was recalled again in 2006 and 2007, both times to recall several other sizes of the device. The FDA, along with Davol, Inc., a subsidiary of C.R. Bard, Inc., recalled certain models of the Bard Composix Kugel Mesh Patch (below) after reports that the memory ring had broken, causing a number of painful and serious injuries in hernia patients.

Because the reports of side effects were so severe, the FDA designated specific lots of the Kugel Mesh X-Large Patch as a Class I recall.  This level of recall is defined as a product that is dangerous or defective and could cause serious health problems or death.

According to the FDA Recall Notice, "Patients who have been implanted with a Composix Kugel Mesh Patch during hernia surgery should seek medical attention immediately if they experience symptoms that could be associated with ring breakage. These symptoms include the following: In a March 24, 2006 recall notice, Bard recommended that health care professionals "Immediately discontinue use of the specific product codes and lot numbers listed below. Additionally, please immediately distribute copies of this Important Patient Management Information to clinicians who may have implanted, or who may be managing, patients already implanted with one of these products under voluntary recall."

Kugel Mesh attorneys are also investigating the following hernia mesh patches manufactured by Davol and Bard that have not been recalled, but defects have been reported.

For further information on the three recalls, visit the FDA website.

In its second-quarter filings, C.R. Bard reported it settled some lawsuits related to use of the Composix Kugel Mesh Patch. According to The Providence Journal (07/06/11), Bard will pay $184 million to settle 2,600 of approximately 3,600 lawsuits filed against the company to date. The lawsuits claimed that the company's Composix Kugel Mesh hernia patch caused serious medical complications including bowel perforation, sepsis, intestinal fistulas and abdominal abscess formation.

In 2010 a jury in the U.S. District Court for the District of Rhode Island found Davol and Bard liable for injuries suffered by plaintiffs Christopher Thorpe and Laure Thorpe. The drug device company was also found liable for the failure to warn of dangers associated with the patch. The Thorpe case resulted in a $1.5 million verdict for the plaintiffs. Christopher Thorpe' attorneys claimed that he suffered severe internal injuries caused by a broken plastic ring on the hernia repair mesh, which included an abdominal wall abscess and fistula and resulted in him undergoing a number of surgeries to repair the damage. The jury award $1.3 million by the jury for personal injury damages and $200,000 for loss of consortium.

If you or a loved one has suffered bowel perforation or chronic enteric fistulae due to the Kugel Mesh patch, please send your complaint to a Kugel Mesh attorney by clicking the link below. Your claim will be reviewed by a Kugel Mesh lawyer at no cost.
Please click here for a free evaluation of your Kugel Mesh Hernia Patch claim
Last updated on Feb-1-12

“If I knew that some Kugel Mesh had been recalled, I would have insisted on having it taken out sooner,” says Ann. “This mesh had 10 years to seriously damage my body.”READ MORE
Living with Hernia versus Kugel Mesh

Harry wishes he had spent more time researching Kugel Mesh before having surgery to treat a hernia. After two more unsuccessful surgeries to remove the Composix Kugel Mesh patch, Harry is filing a Kugel Mesh lawsuit.READ MORE
Kugel Mesh Victim Says She Would Rather Live with a Hernia

Posted by
Kansas
on October 4, 2007
I had been having a poking sensation since the fall of 2005 and was told by two physicians there was nothing wrong with my mesh. On Sept 15, 2007 I was hospitalised with a bowel perforation and taken to surgery for a bowel resection. I had no prior diarrhea or negative health history to lead to this condition. The surgeon and resident told me they had to change gloves during the surgery due to being poked by the broken ring.
Posted by
California
on October 3, 2007
I am 8 months post op and the pain has not gone away
This is not normal. I have sought out a new doctor and now have to have the mesh removed. This is a miserable surgery that takes many months to recover. I have no choice but to have it removed. The pain will not go away.
Posted by
California
on September 27, 2007
I am a 24 y/o male that has suffered from a left inguinal hernia; my first operation on this hernia was performed when I was 19 y/o ; I began to feel pains coming from the area and the doctor assured me this was normal for scaring. At age 21 (roughly 18 months after surgery) the hernia was repaired again because a noticeable bulge had re-formed just above the original repair scar. The doctor was able to go in through the same scar. I still receive unexplained sharp pains that are in my abdominal area nearly 3 years after the second surgery. In some instances the pain is so great I fall to my knees. I have not been able to get a primary care physician to do further testing for me to see if my pains are affected from the mesh.
Posted by
Washington
on July 22, 2007
Because of the pain I only get 2 to 3 hours of sleep each night and have nausea associated to the pain. At times the hernia area swells. For many years the pain has made it very hard to have sexual activity and enjoy it. I have been to the doctor many times but have not gotten any relief.
Posted by
Texas
on July 13, 2007
Consistent bleeding of the abdomen, which has cost over $100 per month to control for the past 5 years; have actually pulled two pieces of plastic "mesh" out of the abdomen, which led to the closing of previously open wounds. Extreme heaviness in the abdominal area due to protruding intestines; permanent deformations as a result. Extreme numbness on the exterior of belly.
Posted by
Idaho
on July 7, 2007
I developed a severe infection immediately after the mesh was put in. I never seemed to heal completely from the surgery either. For a full year I was in severe pain, my abdomen was constantly distended, I developed a large red lump on my stomach and I caught every illness that came around. I basically lost a year of my life due to pain and illness. I recently endured a very painful surgery to have the mesh removed and I can't even begin to explain how hard my recovery has been. As of this date I have not fully recovered.
Posted by
Arizona
on June 20, 2007
Initial hernia surgery with mesh 1996, surgery and replace mesh 1/2000, another surgery for swelling and "relocating mesh" 3/2000 and a fourth surgery 5/2000. All surgeries left me in pain, fever, tendernes, swelling, fluid accumulation, nausia, vomitting, lack of energy, inability to be active and causing weight gain, depression, leaking fkuid, subacious cysts, distended abdomin, and multiple discomfort. Dr. told me to undergo a 5th surgery to ensure everthing is alright.