Although the Composix Kugel Mesh hernia patch was recalled in 2005, and in its wake the manufacturer offered settlements in about 2,600 lawsuits, claims are still being filed. Earlier this year, The American Surgeon reported a case of mesh migration several years after a woman had hernia surgery. 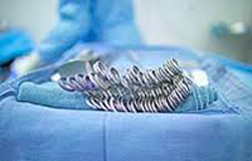 (The mesh was recalled because the memory recoil ring that opens the patch after placement can break and/or buckle under stress and cause serious complications.)

In the report (February 2014), surgeons said the 58-year-old woman underwent laparoscopic incisional hernia repair with Bard Composix Kugel Patch and it was the first case report of mesh erosion into the transverse colon after incisional hernia repair.
The report concluded that “surgeons should be aware of the possibility of the rare but potential complication of mesh erosion.”

A colonoscopy revealed that the mesh had protruded through the patient’s colon. Surgery involved removal of the mesh, partial removal of the colon, small bowel resection, and finally repairing the hernia without mesh.

Last October a woman filed a Kugel mesh lawsuit against Davol Inc. and C. R. Bard Inc. requesting a jury trial (Case No. 6:13-cv-00747). Alicia Daniel was implanted with Kugel mesh to repair ventral hernias. The lawsuit accuses the medical device makers of negligence “for failing to adequately and properly test and inspect the Kugel Mesh to determine whether or not it was safe for the purpose for which it was designed, failing to utilize and implement reasonably safe design practices in the manufacture of mesh so as to avoid an unsafe finished product, failing to have adequate safety measures in place and for failing to timely warn physicians.”

The first Kugel Mesh Hernia Patch bellwether case resulted in the nine-person jury finding that the hernia patch implanted in more than 100,000 patients was defective and unreasonably dangerous due to its propensity to change shape and buckle in the body.

Many of those patients suffered serious hernia mesh complications such as hernia mesh infection, bowel perforations, bowel obstructions and chronic enteric fistulas. In the US alone, approximately 600,000 hernia operations are performed each year.

Posted by
James
on November 2, 2014
I had the same Mesh when the VA Operated on me in 2005 about 2 months later after the pain came back and I felt burning down there that one corner of the patch had come lose and that I would have to live with it! That's the VA for you!!! Arkansas VA's SUCK!
Posted by
Anthony Austin Sr.
on August 11, 2014
Mr. Rusty Smith, I have had 3 types of hernia surgery that has involved some type of mesh. I myself have continued to experience low grade fevers, and severe pain. I would like to obtain some type of justice from this mishap. If you wish to assist each other in this matter. Please contact me at my e-mail ajaustin2006@yahoo.com. THANK YOU
Posted by
Rusty Smith
on August 8, 2014
My dad had a hernia surgery in 2003 and died 30 days later...they did another surgery to remove some of the mesh because it was infected...he had a fever of 107 the day after his surgery...he had the kind of patch that got recalled but they recalled every size but the one he had...My dad was taken from our family when I was only 16 because of a defective medical product...if not for that mesh patch I know without a doubt my dad would still be here...I don't even care about money...I just want justice...my dad died and they were just like opps sorry.