Lawsuits are being filed against the Johnson & Johnson subsidiary Ethicon alleging its Physiomesh Flexible Composite Mesh is a defective product. The abdominal mesh, which is used in laparoscopic hernia surgeries, has been linked to higher than normal revision rates than other surgical hernia mesh products. Ethicon announced a Physiomesh Flexible Composite Mesh withdrawal after patients suffered numerous adverse hernia side effects, including hernia mesh revision surgery. Physiomesh lawyers are investigating Ethicon complaints nationwide, and an Ethicon Physiomesh class action lawsuit has been filed in Canada.

Send your Ethicon Physiomesh claim to a lawyer who will review your claim at NO COST or obligation.
GET LEGAL HELP NOW

The Physiomesh composite mesh was designed for use in laparoscopic hernia surgeries, including ventral and inguinal hernia repair. This surgical abdominal mesh is made of polypropylene, which has also been used in transvaginal mesh Symptoms of mesh failure include: 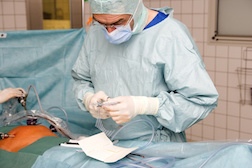 In May 2016, the Ethicon Physiomesh Flexible Composite Mesh products were withdrawn from the market by Ethicon after studies suggested the medical implants had higher failure rates than other mesh products available on the market. The mesh was recalled in other countries, but not the U.S. Ethicon gave medical professionals up to September 16, 2016, to return unused products for a full refund. According to the withdrawal issued by Ethicon, "The recurrence/reoperation rates (respectively) after laparoscopic ventral hernia repair using ETHICON PHYSIOMESH™ Composite Mesh were higher than the average rates of the comparator set of meshes among patients in these registries."

The two studies involved unpublished data from a pair of European registries that found a discrepancy between Physiomesh flexible composite and the other meshes in the registries after laparoscopic ventral hernia repair. In a letter to healthcare providers, the West Somerville, N.J.-based Ethicon believes higher revision rates are due to a “multifactorial issue,” possibly including “product characteristics, operative and patient factors,” but hasn’t been able to pin down a cause.

Ethicon said that patients already implanted with the product should be followed as usual. The recall does not involve any other Ethicon meshes, including the Physiomesh Open flexible composite mesh.

Ethicon Physiomesh and the FDA

The FDA states on its MAUDE adverse event report (December 2010) that the Physiomesh resulted in tears, rips, and holes. A hernia patient developed severe pain with a visible recurrence and bulging after hernia repair procedure and underwent a second laparoscopic procedure to remove the mesh. Another adverse event report (Apr 2011) submitted to the FDA says the mesh pulled away from the abdominal wall, resulting in a second surgery.

Ethicon Physiomesh was approved by the FDA in March 2010. Here is the submission and approval , which doesn’t require human clinical trials and does not require a premarket approval application (PMA), as longs as it can be demonstrated that the new product is substantially equivalent to another device that was previously approved by the FDA. (The FDA’s 510(k) has a reputation for being easy, inexpensive, and less thorough.)

Ethicon told the FDA that its Flexible Composite Mesh met all testing criteria, demonstrated substantial equivalence to its predicate devices and did not raise any new questions of safety or effectiveness.

An Ethicon Physiomesh study showed that the mesh has a much higher failure rate than other widely available hernia mesh products: 20 percent of Ethicon Physiomesh implants fail within six months of implantation, requiring patients to undergo hernia revision surgery. Further, with each surgery, scar tissue build-up makes every revision attempt less likely to succeed. This hernia mesh is more likely to cause adhesions, seromas, hemorrhage and lower tissue integration in patients.

The first physiomesh lawsuit was filed by Matthew Huff, just weeks before the mesh was withdrawn by the company, alleging that the hernia repair mesh was defective, unreasonably dangerous and not suitable for use. Huff developed severe abdominal pain, ever, chills, nausea and redness. He was treated for an infection and two abscesses and an intestinal fistula. The trial is set for January 2018 in the Southern District of Illinois. (Case No. 3:16-cv-00368-JPG-PMF)

A Florida woman in September 2016 filed a lawsuit following failed incisional hernia repair in May 2014 with Ethicon’s Physiomesh Flexible Composite Mesh (Product Code PHY2025V). After hernia surgery, Joanne Quinn experienced persistent abdominal pain, diminished bowel motility and bowel obstruction. She underwent a revision surgery in July 2015 but the surgeon was unable to remove all of the allegedly defective material from her body. In the lawsuit, Quinn claims that she will likely suffer pain and medical complications for the rest of her life due to debris from the hernia patch that remains in her abdominal wall. She further claims that Physiomesh is made from materials that are not inert and that react to human tissues, placing patients at risk for chronic pain, infection, hernia recurrence, adhesions, intestinal blockage, mesh migration, mesh contraction and repeated surgery.

If you or a loved one has suffered similar damages or injuries, please click the link below and your complaint will be sent to a lawyer who may evaluate your claim at no cost or obligation.
Please click here for a free evaluation of your Ethicon Physiomesh claim
Last updated on Oct-14-20

Lorna P., one of many hernia mesh victims, is hopeful that she will receive compensation after hearing that the jury in the second C.R. Bard bellwether trial awarded $255,000 to a man allegedly injured by C.R. Bard’s hernia mesh.READ MORE
Covidien Parietex Lawsuit Claims Hernia Mesh Defective and Dangerous

Fifteen hernia mesh victims have filed a motion with the U.S. Judicial Panel on Multidistrict Litigation seeking to consolidate and centralize Atrium’s ProLite and ProLoop mesh claims before one judge in U.S. District Court for the Central District of California.READ MORE

Posted by
dave miga
on December 8, 2019
I did my own research before my hernia surgery and couldn't believe that polypropylene was being used; anyone with a background in plastics knows that this material has limited strength and decomposes (like nylon) and tears. I chose a polyethylene mesh and never looked back. Nine years later I have had zero problems. Too many idiots in the industry; another reason I don't allow anyone else to make my medical decisions for me and I won't fly jets from companies that hire idiots who don't belong in place of experienced design engineers.

Disclosure: I engineer medical electronics where peoples lives are on the line. Too bad there are others in the engineering and design industry that don't have the brains or talent required.