Her name is Eleanor Aguilar and Chinese drywall chased her out of her own home. Her townhouse in Lauderhill, Florida, was built with defective China drywall from Knauf Plasterboard Tianjin. The defective drywall compromised her health as well as her appliances—and now her home will take three months to remediate. 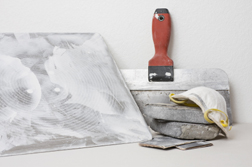 But at least it's getting done. According to CNN.com on February 8, Knauf announced a year ago that it would renovate, on its own dime, any home with defective drywall that was built with its product.

The Chinese drywall problems stem from elevated levels of hydrogen sulfide contained within plasterboard imported from China at a time when building demands, together with the impact of Hurricane Katrina exhausted the normally robust supply of American-made drywall.

The hydrogen sulfide, in addition to making occupants ill, turned copper wiring black and impacted the coils in air conditioning and refrigeration systems. To that end, it is the position of the Consumer Products Safety Commission that to properly remediate a home, all problematic drywall would have to be completely removed. In addition, all electrical components, wiring, smoke alarms, fire suppression systems and natural gas pipelines should be replaced in order to properly eradicate all issues pertaining to the defective Chinese drywall.

Aguilar reported that she had spent thousands of dollars to replace televisions, computers, printers and other components that failed without warning against a backdrop of a home that smelled like rotten eggs most of the time.

More CHINESE DRYWALL PROBLEM News
The most grievous aspect, Aguilar reports, is the impact to her health. The Florida resident suffered from migraines, nosebleeds and upper respiratory problems. After her doctor recommended that she move out of her home, her health improved.

Drywall problems originating with defective product from China have affected homes in 42 states as well as well as Puerto Rico and American Samoa. The Safety Commission reported nearly 4,000 complaints about defective drywall across the nation.

It should be noted that not every company supplying defective Chinese drywall has offered to remediate homes and pay for out-of of-pocket expenses like Knauf has. Homeowners forced to leave their homes have been put into financial duress by having to carry the costs of their now-vacant home, while incurring expenses for rental accommodations. Those who cannot afford to carry two homes are forced to remain, at significant risk to their health.

Posted by
Aileen Williams
on October 23, 2011
I moved into our house in 06 for 5 years now my boys have had nose bleeds my girls are periodically sick I have migraines and now my son is getting them I am not sure what to do has someone eles had this problem?
Posted by
Dan c
on February 24, 2011
Why doesnt our goverment hold China responcible for this disaster and discontinue any future work with that country, until the people affected are compensated. The answer is easy, because American corporations are more interested in the profit they make, than the health of Americans.
Posted by
slavko grguric
on February 21, 2011
Chinese drywall is a larger economic disaster than all hurricanes put together in the last ten years, and yet, President Obama refuses to even acknowledge the people that lost their homes. I wonder if it is because of mostly the middle class people that were affected?