Recent studies have found that babies exposed to Celexa (Citalopram) during certain periods prior to birth run a risk of experiencing Celexa side effects. Those Celexa birth defects include a risk of persistent pulmonary hypertension of the newborn (PPHN), oral cleft, Hypoplastic Left Heart Syndrome and coarction of the aorta. A potential link between Celexa and birth defects has been reported in published studies including one published in the New England Journal of Medicine. 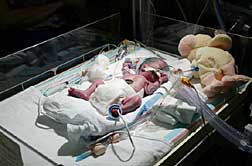 Celexa, known generically as citalopram, is in a class of drugs known as Selective Serotonin Reuptake Inhibitors (SSRIs). SSRIs work by increasing or restoring serotonin levels in the patient's brain and relieving depression. Celexa is used to treat patients, including pregnant women, with major depressive disorder and obsessive-compulsive disorder.

Studies suggest that Celexa can increase the risk of birth defects when taken by pregnant women, although the doses used in these studies were higher than normal therapy doses. Celexa is excreted in breast milk, and it may cause excessive sleepiness and/or weight loss in a nursing infant so it is not recommended that women breastfeed while taking Celexa. The FDA classifies Celexa as Pregnancy Category C, meaning that studies in animals suggest the medication could be linked to an increased risk of birth defects; however, there are no well-controlled studies involving humans. As a result, the FDA recommends that Celexa only be used during pregnancy if the benefits outweigh the risks.

In August 2011, the US FDA announced that it was revising the labeling of Celexa to warn patients about risks associated with the medication. Specifically, the FDA warned that patients should not take more than 40 mg per day because of an increased risk of potentially fatal heart problems when Celexa is taken at a higher dose. The announcement was made following a study that revealed patients who took 60 mg of Celexa daily had a higher risk of heart problems related to the heart's electrical activity than patients who took a lower dose or took a placebo.

In March 2012, the FDA changed the warning label for Celexa, to alert patients that the drug is not recommended in patients with congenital long QT syndrome. Furthermore, the FDA recommended a maximum daily dosage of 20 mg for patients older than 60.

In February, 2006, the New England Journal of Medicine reported that babies exposed to antidepressants such as Celexa in the last trimester were six times more likely to be born with PPHN than babies who were not exposed.

Babies born with PPHN have abnormal blood flow through their heart and lungs, and their bodies are deprived of oxygen. This may cause organ failure in the brain and kidneys. About 20 percent of babies born with PPHN do not survive, and those that do may have long-term breathing problems.

A study published in the July 2011 issue of Obstetrics & Gynecology suggests a link between Celexa and neural tube defects. Researchers reportedly found that use of citalopram while pregnant—specifically during the first trimester of pregnancy—was associated with an increased risk of having a baby with a neural tube defect, including spina bifida.

A study published in the journal Archives of General Psychiatry suggests that women who take an SSRI antidepressant during the 12 months prior to delivery are at an increased risk of having a baby with autism spectrum disorder. According to researchers, women who took an SSRI during the before delivery had approximately twice the risk of having a baby born with autism. When women took an SSRI during the first trimester, the risk of a baby born with autism spectrum disorder jumped to approximately four times that over women who did not take an SSRI.

Celexa and Hypoplastic left heart syndrome: Hypoplastic left heart syndrome occurs when the left side of the infant's heart—including the mitral valve, left ventricle and aorta—does not develop fully, possibly resulting in sudden death. Patients may require a heart transplant to survive. Furthermore, patients who survive may have to undergo additional surgery as they age.

Celexa and Pulmonary Stenosis: Pulmonary stenosis is a narrowing of the pulmonary valve, resulting in decreased blood flow to the lungs.

Celexa and Septal Defect: A septal defect is a hole that develops in the wall of the infant's heart. This can cause improper blood circulation, which forces the heart to work harder than it should to pump blood. Patients may require open-heart surgery.

Celexa and Transposition of the Great Arteries: Also known as transposition of the great vessels, this occurs when the aorta and the pulmonary artery, which carry blood away from the heart, are reversed. It can result in a lack of oxygen in the blood and often requires surgery to recover.

Celexa and Craniosynostosis: Craniosynostosis occurs when one or more of the sutures in an infant's skull harden prematurely, which can cause a misshapen skull, intracranial pressure, and a lack of growth in the child's head. A 2007 study, which was published in the New England Journal of Medicine (06/28/07), found a potential link between the use of SSRis during pregnancy and craniosynostosis.

Celexa and Cleft Palate: A cleft palate occurs when the separate parts of the skull that form the roof of the mouth do not join. A cleft palate can cause problems with feeding, speech and breathing and can also cause ear infections and hearing loss.

Celexa and Cleft Lip: A cleft lip is a facial defect affecting the infant's upper lip, which can cause delays in speech and language.

Celexa and Club Foot: Club foot occurs when the bones, joints, muscles and blood vessels in an infant's leg and foot develop abnormally. Club foot presents with the foot turned inward and downward, and can cause pain and problems with mobility.

If your child was born with a birth defect or suffered other side effects, and you took Celexa while pregnant, you may be eligible for compensation. Please click the link below to send your claim to a Celexa lawyer who will review your case at no cost to you.
Please click here for a free evaluation of your Celexa claim
Last updated on Apr-23-12

In August, the online publication Slate (8/7/12), owned and controlled by the same organization that publishes The Washington Post, devoted some space to the ongoing debate over pregnancy and SSRI antidepressants, and the effect the latter could have on a fetus. Celexa, part of the Selective Serotonin Reuptake Inhibitor (SSRI) class, has been cited for rare Celexa birth defects.READ MORE
Celexa Linked to Birth Defects in Studies

Although one of the most reported and studied of the Celexa birth defects is likely persistent pulmonary hypertension of the newborn (PPHN), there are reportedly other Celexa side effects in infants that pregnant mothers could be rightly concerned about. In fact, studies suggest that Celexa is linked to birth defects other than PPHN.READ MORE
Celexa Lawsuit Results in Settlement with Idaho

The widely-held position by the US Food and Drug Administration (FDA) that drugs are considered acceptable for use if the benefits for the intended patient outweigh the risks, has never been debated more stringently than with SSRI antidepressants and their relationship to pregnant women. Specifically Celexa (Citalopram), and the potential for Celexa birth defects.READ MORE

Posted by
Belinda
on October 20, 2016
Our daughter was born on March 8, 2004. I also took celexa while I was pregnant with her not knowing the danger it was causing our daughter until I had her by C-Section that morning.. She was born with a cleft lip due to me taking celexa.. When she was 2 months old she had reconstructive surgery to begin her long process of surgeries that will follow!! When she was 6 months old she had another reconstructive surgery done and I'm here to tell you it yes her mouth was swollen but she was on the road to recovery. When she was a 1 1/2 she had her major surgery where they started sewing her lip from the inside together and came outwards.. She only had about 20 small stitches the surgeon said, he took his time on her and everything it lasted 4 1/2 hrs if you count the recovery time... Then when she was 4 1/2 he did some touch up work on her lip.. He said her next major surgery she will have will be to put a cartlidge in the right side of her nose and that will be will her face fills out he said around 13 and my daughter is 12 now , She is a beautiful red head lil lady that I wouldn't take nothing for.. I love her too the moon and back no matter what birth defects she has...
Posted by
Charity
on January 24, 2016
I started taking Celexa at 7 months pregnant with my son in 2010. He was born on 02/17/2011. I was assured that this medication was safe for me to take while pregnant and breastfeeding. He had to be resuscitated at birth and was in the NICU for 2 1/2 days on oxygen. All his life has been sick. He's an accute asthmatic and takes several daily meds. He also has behavior issues, such as adhd and odd. He is also about to start physical therapy and occupational therapy.
Posted by
Kentucky
on February 24, 2014
My son was born with a defect to his intestine, which had resulted in immediate surgery shortly after his birth. AND to THIS DAY he STILL HAS stomach/intestinal problems!!
Posted by
Mississippi
on January 27, 2014
I took Celexa while pregnant and my daughter was born with autism, she's deaf in one ear, and developmentally delayed.
Posted by
Colorado
on June 5, 2013
I am still suffering from grief as this was my first and only child.
Posted by
British Columbia
on September 20, 2012
I took 20mg of celexa while pregnant for depression and my daughter has just been diagnosed with pulmonary stenosis. I also took this medication before I was pregnant and am still taking it now while breast feeding. I was led to believe that it was safe.
Posted by
Georgia
on September 13, 2012
Child has a permanent birth defect.
Posted by
Kansas
on March 18, 2012
Constant doctor visits, every time she grows, she seems to develop a new tumor, hormone changes especially in females can cause them to grow on internal organs, and lead to death.
Posted by
Nebraska
on December 24, 2008
He has behavioral problems that require treatment. We are only getting started with treatment. Even when I was pregnant with him he was over active. Now he suffers from ADD, ADHD, and ODD to the point where it is heartbreaking.
Posted by
Pennsylvania
on July 11, 2008
Born 9/15/2002, during pregnancy used Celexa for 7 months. Baby born on due date, but had respiratory problems which had child under oxygen for several hours. Since birth he has been in the ER several times for Asthma attacks and also January 24, 2008, just recently in the hospital for 5 days due to respiratory problems. All medical records were documented by the U.S. Naval Hospitals Havelock, NC, Twenty-nine Palms, CA and then CHOP in Philadelphia, PA. I will gladly show you the records for you to determine if I have a valid claim for my child.