Are Celexa Side Effects Affecting Infants? 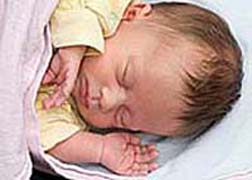 A study conducted at the University of British Columbia and presented to the American Association for the Advancement of Science Annual Meeting (and reported online at publicaffairs.ubc.ca; 2/17/12) suggests that a mother's mental health and use of selective serotonin reuptake inhibitors (SSRIs) could play a role in the infant's development. Specifically, the study found that untreated maternal depression and the use of an SSRI antidepressant could affect the development of speech perception in different ways.

According to researchers, maternal use of an SSRI (which they called an SRI for serotonin reuptake inhibitor) was associated with accelerated ability to recognize their native language, while depression that was not treated was associated with delayed language recognition. Researchers noted that it was not clear if the acceleration or delaying of language recognition had consequences on later language development. They also noted that not all infants are affected by the use of the medications in the same way.

More CELEXA News
Untreated maternal depression has been shown to have consequences for an infant. These include premature birth, low birth weight and developmental delays. However, use of SSRI medications while pregnant has been shown in some studies to have an effect on the infant as well. These side effects reportedly include persistent pulmonary hypertension, autism and developmental delays.

Since that time, a study was published in the British Medical Journal (1/12/12) suggesting that infants exposed to SSRI medications while in the womb had up to two times the risk of being born with pulmonary hypertension.

Until more studies are done to clear up the conflicting results, women are left asking whether or not Celexa and other SSRI medications are worth the risk.