Under the SEC Whistleblower program, a successful whistleblower lawsuit can award a whistleblower of 10-30 percent of the amount the SEC recovers in sanctions, depending upon the quality of information provided to defraud government. Since the Securities and Exchange Commission (SEC) implemented the Whistleblower Program, it has seen a considerable increase in complaints. The program also protects whistleblower rights and prohibits retaliation. Blowing the whistle can get very complicated, so if you plan to “blow the whistle’, first seek advice from a whistleblower attorney. If you wait too long or go to the FBI alone, there is a chance that you could miss a claim and whistleblower award, or even worse, risk being found complicit in the fraud.

Send your SEC Fraud Whistleblower claim to a lawyer who will review your claim at NO COST or obligation.
GET LEGAL HELP NOW

The U.S. Securities and Exchange Commission (SEC)is the federal agency responsible for enforcing the federal securities laws, regulating the securities industry and overseeing the nation's stock and options exchanges.

The SEC is authorized by Congress to provide monetary awards to eligible individuals – whistleblowers — who come forward with original, detailed and high-quality information that exposes SEC fraud. Such information can result in a Commission enforcement action in which over $ 1 million in sanctions is ordered. The range for whistle blower awards is between 10- 30 percent of the money collected in actions brought by the SEC and related actions brought by other regulatory and law enforcement authorities. The Whistleblower Program also prohibits retaliation by employers against employees who provide them with information about possible securities violations. 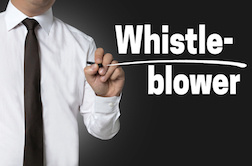 "The Whistleblower Program is designed to aid the SEC's efforts to protect investors from those who violate the securities laws by encouraging those who are aware of misconduct to come forward to report it to us so that prompt and effective action can be taken to prevent or stop the misconduct." …Sean X. McKessy, Former Chief, Office of the Whistleblower, Aug 11, 2011

The U.S. Securities and Exchange Commission (SEC) whistleblower program went into effect on July 21, 2010, when President Obama signed into law the Dodd-Frank Wall Street Reform and Consumer Protection Act. Since that time, the SEC has reported a significant increase in complaints, and in particular security fraud, including manipulation of a security's price or volume, Ponzi schemes, insider trading, theft, bribery of foreign officials, and more. In a press release(May 2017), the agency announced that, since the program began, it has levied nearly $1 billion in penalties and awarded some $154 million to 44 whistleblowers. Unlike other kinds of whistle blowers, SEC whistle blowers can remain anonymous forever.

Also since 2011, the SEC has recovered $975 million in enforcement actions ranging from elaborate investment schemes to financial advisors working to benefit themselves rather than their investors. Up until 2015 the SEC received 10,540 tips with the bulk of the tips coming from California (2,046) with New York State coming in second (950). It also received tips from outside the US – the top five locations were the UK, Canada, China, India and Australia.

Once a tip is received, attorneys in the SEC enforcement division evaluate the information and decide if enforcement action is necessary, then the SEC has nine months from passage to implement rules governing the process.

The SEC Whistleblower Program is dictated by two federal laws, and these acts impact all SEC whistleblowers:
The regulations governing the whistleblower program are complicated and often indecipherable to a non-lawyer. Below is very basic information, and visit the SEC Office of the Whistleblower; if you have a potential whistleblower case, your next step should be advice from a whistleblower attorney.

An SEC Whistleblower attorney will first determine whether you have a strong case by investigating, evaluating and filing your case. Your whistle blower lawyer will collaborate with the government throughout the process—that can sometimes take years—to maintain your anonymity and maximize your reward.

There are hundreds of Financial Fraud schemes, besides stock and securities fraud. Some common fraud schemes may involve:
The SEC considers the following three factors when deciding whether your whistleblower reward should be increased (from as low as 10 percent or as high as 30 percent):

SEC whistleblower retaliation occurs when you are wrongfully terminated, intimidated, harassed, or subjected to any other form of discrimination after engaging in a protected whistleblower activity. SEC whistleblower protection laws prohibit an employer from retaliating against you after you make a complaint about a violation of any law, rule, or regulation subject to SEC regulation. These laws broadly apply to a wide class of employees, including:
If you are an SEC whistleblower and have been retaliated against, you have the right to file a private lawsuit in federal court. You may be entitled to reinstatement, double back-pay, and payment for your litigation costs and attorneys' fees.

Two whistleblowers who gave information on a JP Morgan scheme to overcharge investors in 2015 will split a $61 million reward. It is the largest award ever given to a whistle blower in SEC history. The previous record was $20 million, reported by Bloomberg News (July 2017)

In April 2017, the SEC awarded a whistleblower $4 million, who gave information about securities misconduct, and assisted the SEC throughout its investigation by providing industry-specific knowledge and expertise. About a week later, the SEC awarded $500,000 to a corporate insider whose tips prompted and assisted with an enforcement action. The tipster informed the SEC about hard-to-detect violations of securities laws. The information led the SEC to conduct a formal investigation and take subsequent enforcement action.

The Legal Landscape for Whistleblowers May Have Changed

Washington, DC: It was a little over a year ago that the US Securities and Exchange Commission (SEC) issued an official press release announcing that a Texas-based medical device company, Orthofix International (Orthofix), had agreed to pay $14 million to settle charges brought by the regulator with the help of two SEC fraud whistleblowers. Orthofix, which has faced a SEC whistleblower lawsuit in the past, also agreed to admit to wrongdoing.READ MORE
Plaintiff Wants Appeal of Years-Long Claims, Defendant Opines to ‘Get on with It’

San Francisco, CA: A years-long healthcare fraud whistleblower lawsuit remains an apt example of just how long in the tooth litigation can extend. And while the current version of a health care fraud lawsuit does not resemble the characterization of the original litigation, attempts at various appeals could extend the litigation well beyond 2018.READ MORE

Posted by
Iris Benchlouche
on July 25, 2019
We gave our whistleblower complaint to the SEC in Washington regarding INTEL CORP and others in their secret criminal activities overseas in Israel of producing their micro chip illegally with the Russian mafia oligarch Mr.Lev Leviev, giving them a back door to hacking, also they used our private new industrial property for manufacturing their unlimited quantities of hazardous chemicals used for their semi-conductors microchips components and dumped their toxic chemicals wastes inside the ground for close to decade, without any business licenses or permits, tax evasion money laundering, extortion, bribes to minister of “security” Gilad Erdan…to many crimes to name them all, in short the sec used our report and took actions behind closed doors immediately.
we want to publish it in the media asap, and sue the sec? Pls advice?