Investors who lose money as the result of careless mistakes or intentional fraud by their stock brokers or financial advisers may be eligible to recover their losses through a process known as stockbroker arbitration. Stock broker fraud and other unethical acts on the part of a stockbroker are a violation of the stockbroker's duties to his clients.

Send your Stock Broker claim to a lawyer who will review your claim at NO COST or obligation.
GET LEGAL HELP NOW

Some types of claims that may result in financial awards to investors include: 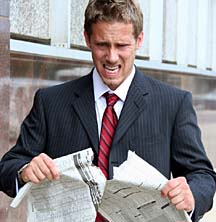 Arbitration claims can involve all types of investments, including stocks, bonds, annuities, and mutual funds.

Most customer claims against stockbrokers and financial "advisers" or "consultants" are required to be brought in arbitration before the Financial Industry Regulatory Authority (FINRA) rather than in court. The cases take about one year to complete and are decided at a hearing before either one or three arbitrators, depending on the size of the claim. The arbitrators are people who are knowledgeable in securities industry disputes.

An arbitration award is final and binding, meaning that there is no drawn out appeals process before the investor receives his or her award, if an award is handed out. Hearings are held throughout the United States.

If you have suffered stock losses as a result of stock broker negligence such as listed above, please click on the link below to send your complaint to a stock lawyer who will evaluate your case at no charge.
Please click here for a free evaluation of your Stock Broker claim
Last updated on Feb-27-14

Washington, DC: Morgan Stanley has been ordered to pay $8.6 million in a stockbroker arbitration claim that alleged unauthorized trading. The award was given to Denis Doyle, who filed the Financial Industry Regulatory Authority (FINRA) arbitration after his accounts experienced a drastic decline in value. Although FINRA typically does not comment on its rulings, according to The Wall Street Journal (6/3/16), the panel cited financial elder abuse when it awarded $2 million in punitive damages.READ MORE
FINRA Bars Two Stockbrokers

Washington, DC: The Financial Industry Regulatory Authority (FINRA) has barred two brokers from the securities industry after finding the brokers guilty of fraud related to their sale of the Prestige Wealth Management Fund, LP. The brokers reportedly consented to the entry of FINRA’s findings but neither admitted nor denied the claims of stockbroker fraud.READ MORE
FINRA Orders $1.9 Million Paid to Victims of Stockbroker Fraud

West Palm Beach, FL: A FINRA arbitration panel has ordered a securities firm, the founder of the firm and a broker to pay almost $2 million to investors who alleged they were victims of stockbroker fraud and churning. The Financial Industry Regulatory Authority (FINRA) issued the ruling after investors claimed the firm, its founder and a broker violated the Florida Uniform Fraudulent Transfer Act.READ MORE

Posted by
Jamaul Joseph
on July 12, 2016
Good day ,
I am in really crazy predicament right now, I am hoping that your company will be able to help me and potentially a lot of other people whom this company has hurt and whose lives they have destroyed.

I have had an account with Binary Book whose headquarter is in London from since August of 2015. Throughout that period until now I have "given" this company $24k with the anticipation that I will have considerable profits in return--quite the contrary. I am extremely disappointed with my experience with this company, losing money is not fun--but beyond losing money the way how I lost $24k is alarmingly problematic.

A few months ago and a period prior towards that, I made attempts to withdraw some funds from my account because I was not making any money. On both occasions with my attempts to withdraw some funds, I was constantly been contacted by traders from the firm in an attempt keep my money with the company. On the last occasion, I was contacted my one Oscar Nick who told me that he was the head broker of the firm and that he will for sure (guaranteed) make money for me.

I told Nick base on what he told me I will allow him to trade the funds in my account. A week later from that conversation, I logged into my account and I saw that a total of $24k was all traded on "ONE" stock TESLA, with anticipation that the stock with go above the strike rate. I was shocked because it seemed quite risky and unorthodox. As the trade approached the expiration date the stock steeply went below the strike rate, and all of my money was in jeopardy.

Several attempts were made to alert my "expert trader" on the performance of the trades however, he never got in contact with me. I sent emails, I called, I spoke to the customer service clerks via the chat line, they told me that they will have him call me...he never did. I tried to sell the trades however, I could not. On the expiration date of the trade, one customer service clerk told me that I can sell the trades 20 minutes before the trade expired, I told the clerk that I will not be able to do so because I will not be at a computer at the time of day due to engagements. On that day 20/05/16 I lost 24k, after a strong campaign to avoid that outcome.

My account also had around 22k in bonus, but my trader chose to use my hard earn money to make such a reckless trade, which he ultimately loss--I am left to think that this act was intentional. My former trader Josh Lanox who was supposedly fired from the firm, was in a relationship with me. He preyed on me as a gay man so that he could get money from me. I have an extensive lodge of Skype messages to prove that.

This company Binary Book is hurting a lot of people and disrupting their lives.


Posted by
Texas
on January 7, 2008
Invested $100,000 with Eurobrothers. Over the Thanksgiving Holiday 2006, they all left the office and allowed a Forex trade to run several days. Most trades are several hours. They lost $75,000 because they were asleep at the wheel.