Although they are often not the focus of as many news headlines as other air traffic accidents, helicopter crashes do happen, and they can be fatal. People who have survived helicopter crashes may suffer serious injuries, including back and neck injuries. Some do not survive. Recently, a jury awarded $7.2 million to the widow of the cameraman who died in a helicopter crash. 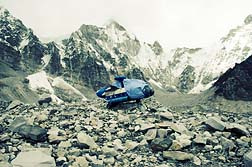 An additional $4.2 million was awarded to a movie producer who suffered serious injuries in the same helicopter crash.

According to a July 14 article at desmoinesregister.com, the jury found the helicopter pilot was 75 percent responsible for the cameraman's death, meaning the pilot will pay three-fourths of the $7.2 million award. The corporate owners of the film that was being shot at the time of the crash will pay the remaining amount. Meanwhile, the jury found the pilot completely at fault for the producer's injuries and will pay 100 percent of the $4.2 million.

Bristol Aerospace, an aviation company that plaintiffs argued was responsible for the crash, was not found liable at all. Although the plaintiffs alleged the helicopter crash was the result of defectively designed windshield-mounted blades, which were designed to slice through power lines, the jury found that the pilot was responsible for the crash while the blades were not. The accident occurred when the helicopter crashed into power lines while shooting footage for a movie.

Meanwhile, a traffic reporter who was injured in a helicopter crash during a morning traffic report has filed a lawsuit against the company that owns the helicopter, alleging the crash was caused by poor maintenance. According to a July 10 article at PalmBeachPost.com, the National Transportation Safety Board (NTSB) ruled that a loose nut on the helicopter caused the crash, which resulted in the reporter suffering a fractured vertebra. The helicopter is owned by Air Coastal Helicopters.

More HELICOPTER CRASH News
In a separate helicopter crash, the NTSB determined that pilot error caused a 2008 helicopter crash that took the lives of the helicopter's pilot and passenger. The helicopter crashed into a house, however the 5 people in the house were not injured in the accident. According to the Eau Claire Leader-Telegram (July 2, 2009), the NTSB found that the pilot failed to maintain proper altitude in the moments before the crash. Furthermore, the man was flying in foggy conditions, with visibility of about 1 mile, and had to rely on his instruments but was not certified for those flying conditions.